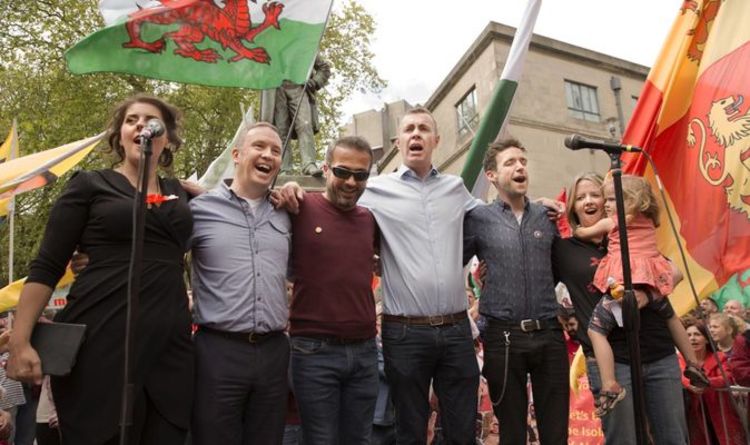 Welsh Conservative Party leader Andrew RT Davies spoke to Express.co.uk about the Welsh independence campaign and noted one of the main groups advocating the cause was having difficulties. YesCymru, which boasts around 18,000 members, saw its entire central committee resign earlier this year as the group was plagued by accusations of abuse among members. Mr Davies said the group was “in a bit of a quagmire” and did not believe Welsh independence would make much headway anytime soon but was happy for people to campaign for it.

The former chair of YesCyrmu, Sion Jobbins, resigned in July as he wished to focus on his mental health.

Recently, Mr Jobbins apologised for how he ran the group as members attacked each other and outsiders for their views.

Speaking to ITV Wales, he said: “Perhaps I should have seen that we needed to strengthen the constitution. I should have foreseen that with a growth in membership there would be more disputes and things like that.

“I didn’t and I was at fault for that as chair, for not providing that leadership. Good people have been hurt by this and I feel that daily so there is blame on my part.”

Mr Davies spoke about the issues earlier this year and said: “We’ve just have the Welsh parliamentary election and one of the political parties stood on independence ticket for a referendum in the next five years.

“They came last out of the three major parties so that tells you what the general public thinks in Wales.

“But we live in a democracy and it’s entirely up to organisations to put their platform out there lay their stall out.

“And YesCyrmu is but one of those organisations that seeks to gain independence for Wales, as I understand it, they’re in a bit of a quagmire at the moment as their central committee has just resigned.

“They’re gonna have some new elections and put some new people in place but as I understand it, there’s all but a civil war going on in YesCyrmu.”

Mr Jobbins spoke to Express.co.uk when he was still chair and explained the party was set up following the Scottish 2014 independence referendum.

He added he would be welcome to work with anyone who supported Welsh independence and offered an olive branch to First Minister Nicola Sturgeon.

Mr Jobbins also explained Welsh independence was less antagonistic than the Scottish campaign which seemed to have a big issue with England.

The former YesCymru boss said he would still be willing to work with the rest of the UK and did not want to pursue an isolationist position.

Mr Jobbins told Express.co.uk that there was certainly a “domino effect” between what happens in Wales and Scotland but stressed the politics were vastly different.

The ex-YesCymru chairman explained his group were not aligned with any political party or position and welcomed anyone who believed in an independent Wales.