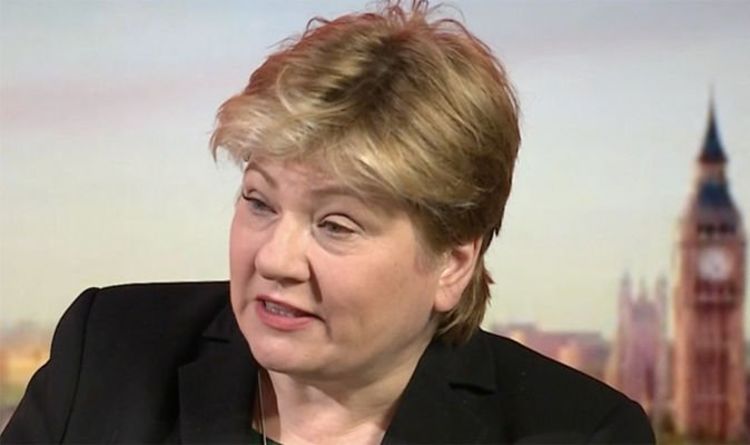 BBC viewers criticised Emily Thornerrby for “waffling” in her interview on the channel this morning. BBC host Andrew Marr also hit out at the Shadow International Trade Secretary for refusing to give answers to “very straight-forward questions”. Others grew “frustrated” with the Labour MP’s tendency to make it “all about Brexit” amid questions of labour shortages and the energy crisis.

Mr Marr grilled the Labour MP, as he complained that she could not give him”a yes or no answer” to whether there should be an energy price cap for industry.

The BBC host said: “I am asking very straightforward questions.”

The MP simply responded: “We need to listening to business and if a strong case, it should be acted on.”

When asked about worker shortages, Ms Thornberry said: “It is all very well to deliver Brexit but you need to make Brexit work.”

Ms Thornberry signalled Labour’s support to extend the temporary visa programme to EU workers not only for HGV drivers but also hospitality and nursing staff.

She continued: “I don’t think when people voted for Brexit, they voted to stop all immigration. They voted for our politicians to be responsible for their decisions.”

Susan Hall, a Conservative London Assembly Member, tweeted: “Oh goodness me, Emily Thornberry on #Marr already arguing about the questions she is being asked.

“She is still going on about #Brexit – hopeless!”

However, others criticised Mr Marr for going easier on Tory minister Kwasi Kwarteng, as @tighabhinn posted: “It seems Marr is giving Kwasi Kwarteng an easy time compared to Thornberry.”

Ms Thornberry criticised the Government for not planning adequately for the ongoing energy crisis.

She said: “We shouldn’t be in a situation where we wait until we are in a crisis and then react. We need to have proper planning.

“As opposition, it is fair for us to say that when we were in power these are the plans we had, the Government cut those, and now we have another wave of crisis.”