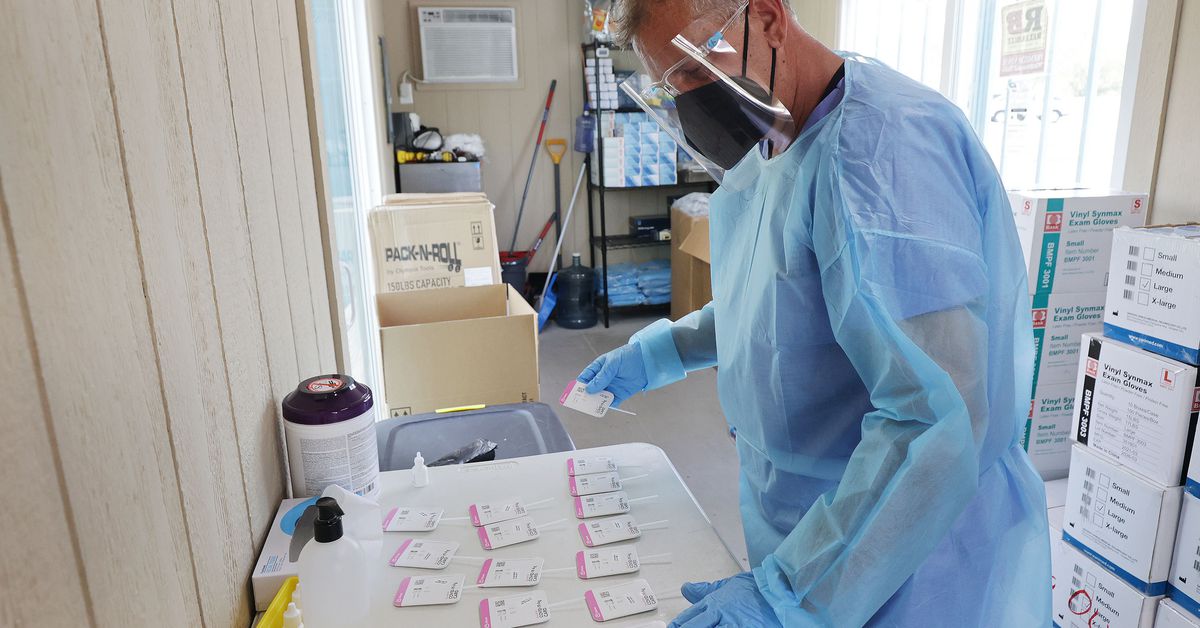 Even though COVID-19 cases are dropping nationwide, Utah now has just as many patients hospitalized with the virus as during the peak of the pandemic — and the state’s case count may be headed back up, University of Utah Health’s chief medical operations officer said Wednesday.

“We’re hopeful to see a downward trend in Utah. It’s certainly not going up at the rate that we’ve seen in the past but we are not out of the woods yet,” Dr. Russell Vinik told reporters during a virtual news conference from the University of Utah Hospital in Salt Lake City.

Utah did see a brief dip in case counts that suggested the latest surge fueled by the highly contagious delta variant may have peaked, but the numbers climbed slightly last week before hitting a plateau of a seven-day average of about 1,400 cases a day.

On Wednesday, the Utah Department of Health reported 1,845 new cases and 17 deaths, bringing the state’s death toll to 3,042 since the pandemic began.

COVID-19 cases tracked by the U. through the health system’s testing centers show “a gradual upward trend in new cases” over the past three weeks, he said, noting that while the area involved is limited, throughout the pandemic the state’s numbers typically follow within a week or two.

That’s making the health system “very cautious, because cases aren’t going down,” Vinik said, adding, “our cases and our hospitalizations are as high as they’ve ever been. So now is not the time to let your guard down. COVID is not over.”

The more than 30% decline in coronavirus cases around the country over the past several weeks is “significant,” the doctor said, but largely the result of southeastern states like Texas, Florida, Alabama and Louisiana experiencing first a rapid rise in cases followed by a steep fall.

For Utah and surrounding states, “the story isn’t as promising,” he said. In Arizona, where schools opened about a month earlier than in Utah, Vinik said “they seem to have reached a peak and a plateau, but they have not seen a downward trend in cases.”

The number of patients hospitalized in Utah with COVID-19 continues to be around 600, with more than a third in intensive care units. According to the Utah health department, virus patients are filling 60% of hospital beds and 91% of those in ICUs.

“These numbers are as high as the peaks we saw last December and January,” Vinik said. The big difference is that health care systems are under additional strain because of staffing issues. Health care workers are leaving the profession due to burnout or accepting signing bonuses and higher wages somewhere else, he said.

“Care is suffering throughout the state,” Vinik said, as patients in rural areas sick with COVID-19 may have to wait a day to be transferred to a hospital equipped to treat them. “They are very ill and we can’t always get to them when we want to get to them.”

Dr. Elizabeth Middleton, an assistant professor of medicine and associate medical director of the medical intensive care unit at U. Health, said patients waiting for treatment become sicker because “our ability to intervene within a short, early window, is significantly limited.”

The COVID-19 patients in the hospital are also sicker than those admitted during last winter’s peak in cases, Middleton said, because they’re not able to get intensive treatments as quickly. She said the hospital has consistently had 30 ICU patients, even though the main unit holds 25.

Vinik said many Utahns who put off preventive care because of the pandemic are now being hospitalized with cancer and other diseases that weren’t caught early. He said the Huntsman Cancer Institute at the U. is “extremely full” right now.

Elective surgeries have been limited at the U. for the past two months, scheduled just 48 hours in advance depending on whether bed space is available, Vinik said, although most procedures don’t require an overnight or longer stay.

The region’s largest health care provider, Intermountain Healthcare, announced in September that 13 Utah hospitals were postponing surgeries for urgent but not life-threatening medical conditions because they were overwhelmed with COVID-19 patients.

Both U. doctors urged Utahns to get vaccinated against the virus to help prevent its spread during the coming months, when families are likely to gather indoors to celebrate Thanksgiving, Christmas and other winter holidays.

“We’re very concerned about what it will bring. We certainly know that family gatherings are one of the biggest places that COVID gets transmitted,” Vinik said. “So if we have another curve like we did last year, we’ll all be in a lot of trouble.”