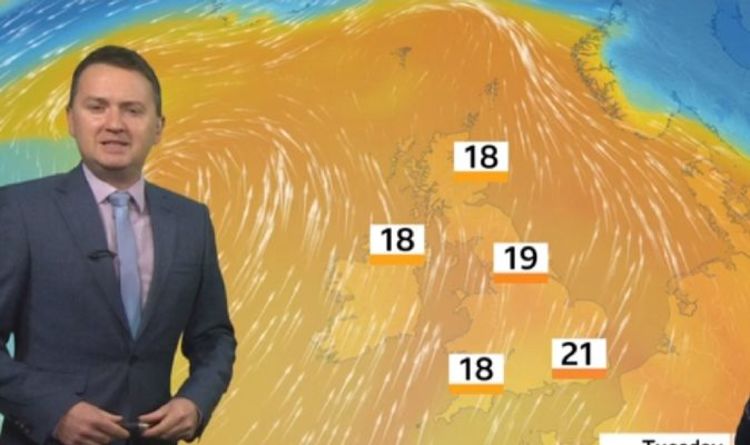 BBC Weather forecaster Matt Taylor emphasised the cold start for many across the UK on Friday. He noted that a cold blast is set to grip the UK over the weekend. However, he added that this was not expected to last with temperatures beginning to rise towards the end of the weekend.

Temperatures are set to peak by Tuesday of the new week with a high of 21C.

Mr Taylor said: “Temperatures are just a few degrees above freezing across some northern parts of the UK.

“It is just about freezing at the moment in the southeast of Northern Ireland and Glasgow is around 1 degree.

“But notice the contrast with what is happening further south, we have got temperatures around 13 to 15C across some parts of southern England and South Wales.

“That contrast is there today but if it is chilly for you by the afternoon it could change.

“It will be 16C in the southeast but temperatures will be lower further north.”

The BBC Weather forecaster noted that temperatures were set to rise as well.

He said: “It is not going to be a particularly long-lived blast of cold air, to be honest.

He said: “There will be patchy light rain or drizzle, staying fairly cloudy for most.

“For many of you, it is going to be a sunny day with just one or two showers dotted around the north of Scotland.

“Temperatures will be around 8 to 13C for the majority.

“Still it will be a little bit more mild though they won’t be raising a great deal from where they are at the moment.