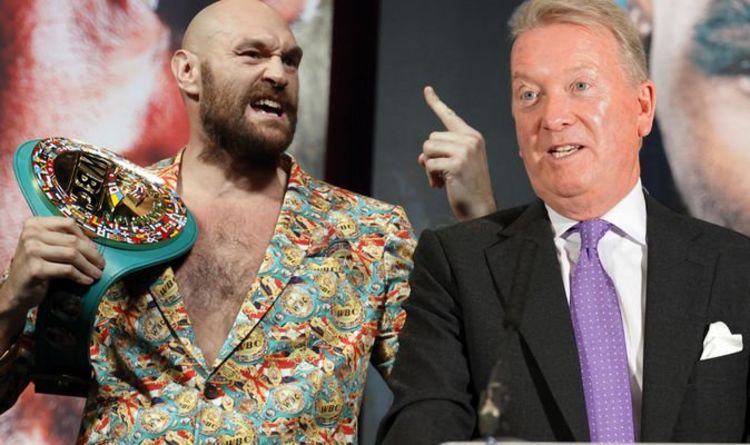 Tyson Fury‘s promoter Frank Warren has teased the possibility of an all-British showdown with Dillian Whyte by declaring his wish to take the Gypsy King back to his home country in his next fight. Fury has not fought in England since his Manchester Arena defeat of Sefer Seferi in June 2018, while his last bout in Britain came when he defeated Francesco Pianeta in Belfast two months later.

Since then, the Gypsy King has been Stateside for three fights with Deontay Wilder and his wins over Tom Schwarz and Otto Wallin.

The unbeaten WBC heavyweight champion is now 31-0-1 after ending his Wilder trilogy with an 11th round knockout of the American in Las Vegas on Saturday night.

Fury had himself been put twice to the canvas by Wilder in the fourth round but recovered in what was an all-time classic fight at the T-Mobile Arena.

The 33-year-old is now setting his sights on his next fight, with a highly-anticipated battle with Anthony Joshua on the back burner after his loss to Oleksandr Usyk.

Fury could take a break and fight Usyk later in 2022 but more likely is that the Briton goes head-to-head with Whyte, with WBC challenger Bodysnatcher fighting Wallin next.

Wilder’s conqueror is expected to be ordered by the WBC to fight the winner straight away if a unification bout with Usyk cannot be put on.

And Warren has suggested that will be the case with Fury’s promoter keen to put on a show in the United Kingdom for in what will be his client’s first fight back in his homeland for four years.

Warren declared: “I would love a homecoming more than anything, for the British fans and everything. Fury is the best heavyweight of his generation and he is up there with all of them.

“Look at his size and chin and his heart to keep getting up off the floor, he gets up. That was the best heavyweight fight I’ve seen.

“He would be a stand-out performer in any era, for anybody. Tyson sells out any stadium in Britain, easy, big time. The fans will come out for him.

“Everything is possible and we will just sit down and look at how we do everything. I was really proud just be involved and with him tonight because he just proved himself to be a true fighting man and he deserves that hero’s homecoming now.”

Whyte (28-2) must first overcome Swedish rival Wallin (22-1) at the O2 Arena in London, having slipped to defeat to Alexander Povetkin last August before bouncing back to beat him in Gibraltar this March.

“I’ve got Deontay Wilder to deal with first and then me, my team, we’ll all sit down and make a decision on what’s next.

“Just for the record, I can beat them all. Every single one of them put together. They can’t beat me, none of them can beat me.”

“Because I unloaded on him every round in our fight. The only thing he did to me was give me a cut in whatever round it was, a couple of cuts.

“But apart from that, he lost every round. So, he’s a tough guy – that’s for sure. And I think he did just give Dominic Breazeale a boxing lesson.

“So, I think he does exactly the same to Dillian Whyte, to be fair. The heavyweight landscape is changing.”