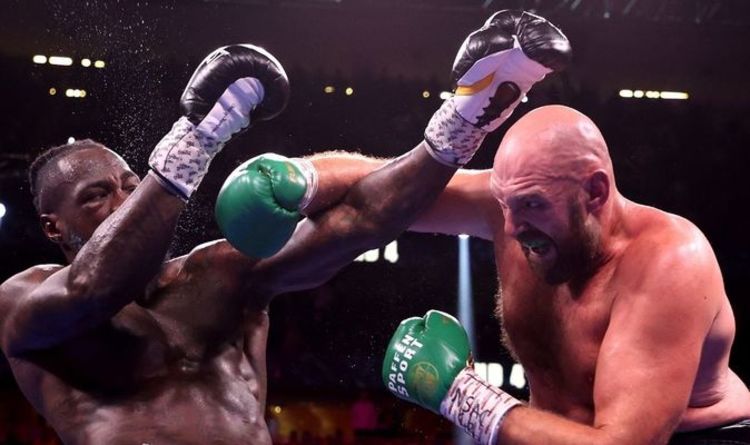 Fight of the Year. It’s as simple as that. Tyson Fury climbed off the canvas twice to beat Deontay Wilder by eleventh round stoppage to successfully defend his WBC and Ring Magazine world heavyweight titles. That only tells half of the story, this was one of the greatest fights in modern boxing history as the pair served up yet another classic in Las Vegas.

As promised, Wilder was quick out of the blocks and his strategy was clear. Target the body with a straight jab in a bid to set up the big, dynamite overhand right.

Fury was composed as the skin around his waistline began to mark up before the Gypsy King came firing back with a thunderous right hand that landed flush on Wilder’s jawline.

From Round 3, the question marks surrounding Wilder’s excessive weight were quickly answered.

The Bronze Bomber was going for broke and began to get erratic looking for the knockout punch as Fury seized initiative and capitalised as Wilder struggled to keep his foot on the gas, sending him tumbling to the canvas.

But this fight was only just getting started. Wilder looked dead on his feet in his corner but he was about to come firing back to show the heart of a champion.

Somehow, he has Fury down twice in the fourth to regain a foothold and now it was the Gypsy King who was saved by the bell.

Fury came firing back in the fifth though just when he needed to show something as he buzzed Wilder with a monstrous right hand.

Once again, Wilder responded well and piled on the pressure as he boxed Fury into the corner up against the ropes. Both fighters, who were at a career heaviest, were now starting to tire.

Where this fight went next was anybodies guess. Fury appeared to receive his second and in the seventh, the round he finished Wilder off the last time they traded leather but the Bronze Bomber was still very much a live threat.

His bandy legs were looking shaky as the Gypsy King punished the body as he looked to sap the strength from the American, who was then rocked by a big hook but once again, he hit back.

Wilder was then badly shaken and fighting on instinct as Fury went for the jugular, he was now in total control.

Fury was boxing beautifully come the eight round, when he landed a similar one-two to the combination then sent Wilder tumbling to the canvas last February.

The Alabaman was now staggering around the ring like a drunk as Fury bided his time and waited to settle the score once and for all. Still Wilder was swinging wildly. He was out on his feet.

The doctor had a look ahead of the ninth round but was happy to let Wilder continue.

Wilder was not letting go just yet as the pair went to war in the ninth, virtually emptying the tank in a grizzly, close-range slugfest. Once again, Fury was reminded that this was not yet done.

The champion scored a second knockdown in the tenth when a cracking hook saw Wilder’s legs buckle beneath yet.

Yet somehow, somehow, despite looking spent, Wilder still came firing back. This was another truly remarkable round as the Bronze Bomber then attempted to take Fury out in the final seconds before the bell.

Fury then finally finished it once and for all when he stopped the Bronze Bomber in the eleventh. This was one of the greatest heavyweight fights of all time, make no mistake about it.