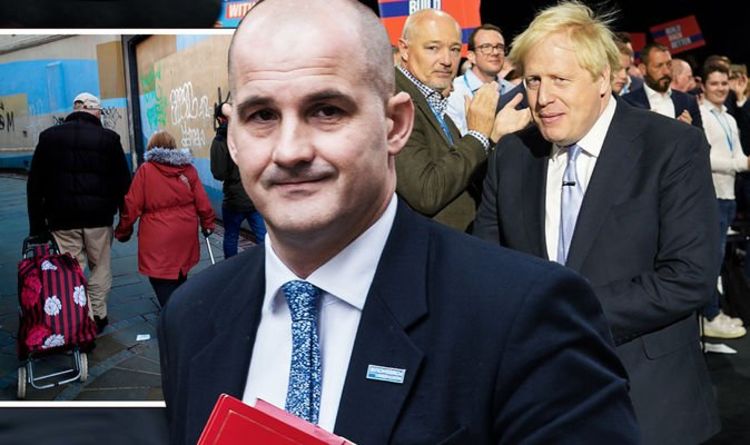 Jake Berry said the Government risks losing support in the areas in which the party surged to victory in the 2019 general election if it does not make the cut. His warning comes as polling reveals 74 percent of voters in the Red Wall back proposals to cut the tax paid by shops in order to make it easier for local businesses to remain open.

Mr Berry, who chairs the influential Northern Research Group of Conservative MPs, said: “The public are clear ‑ the burden of tax on bricks-and-mortar retail is too high.

“Without a cut in business rates at the Budget we risk losing support in our most marginal seats, including in the north and the Midlands.

“Cutting rates would be a huge boost to our local communities and would show quick delivery of the central mission of this Government: levelling up.”

A Deltapoll poll of 1,598 adults published today (October 12) found that 66 percent of people in the UK back a tax cut for shops with support increasing to 74 percent for voters in those seats won by the Conservatives at the 2019 election.

The poll also found 62 percent agree that there are more empty or closed shops in their local area than before the pandemic, with only 10 percent disagreeing.

Overall people said they would be willing to pay more for their online shopping deliveries from Amazon and other retailers if physical shops could then benefit from a lower tax rate ‑ with 35 percent in favour versus 25 percent against.

The findings add further weight to the Daily Express Save Our High Streets Crusade.

The Government is preparing to release the findings of its fundamental review of business rates this autumn, which could change the amount that businesses pay in tax.

In September, the British Retail Consortium warned that four out of five retailers would likely close stores without a reduction in the level of rates they pay.

The MP for Tatton said: “The burden of tax on bricks and mortar retail is too high, and the best single policy to revive our high streets would be to cut business rates. Levelling up must include ensuring taxes come down.”

Research published last week by WPI Strategy shows that business rates receipts have increased by over 200 percent since the property tax was introduced in 1990.

Their data also revealed that 72 percent of constituencies with the highest burden of business rates are in areas of the country most in need of levelling up.

A number of Tory MPs have urged Rishi Sunak to cut at least 20 percent off business rates ‑ taking them to levels last seen in the 1990s.

Business rates typically put £30billion a year in Government coffers. A 20 percent cut will return about £6billion to retailers.

At the Labour party conference, shadow chancellor Rachel Reeves promised she would scrap business rates altogether if Labour were in Government, and replace it with a different system of taxation.