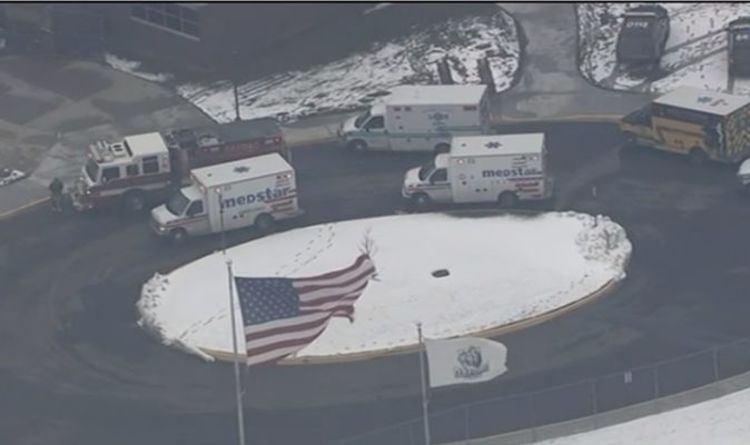 Detroit Police said one of the injured was a teacher. The injured have been transferred to area hospitals for treatment. The FBI is on the scene to assist with the investigation. Police responded to calls of an active shooter just before 1:00 p.m. at Oxford High School in Oxford Township, Michigan.

Police say approximately 15-20 shots were fired from a handgun.

The alleged shooter was said to be a 15-year-old student and was a sophomore at the high school.

According to the Oakland County Sheriff’s Office, multiple patrol units and multiple EMS units are on the scene along with SWAT and Aviation Unit.

All evacuated students will be located at the Meijer store for reunification with parents or relatives.

Oakland County undersheriff Michael McCabe said: “We are still doing a secondary search of the school for any further victims.”

Sheriff McCabe said the first of more than 100 calls came into 911 at 12:51 p.m. to a report of a shooting. Deputies immediately responded to the scene and took the suspect into custody but not until after he shot 10 people, killing three.

The suspect did not resist officers when they arrived. McCabe said he asked for an attorney and would offer no details regarding a possible motive.

Around 2:00 p.m., medical helicopters including the University of Michigan’s Survival Flight had landed in the parking lot of the school as a secondary search was being conducted around the perimeter of the school.

READ MORE:
Boy, 13, fighting for life after being shot on busy street

Isabel Flores, a 15-year-old freshman, was inside the school when the gunshots were fired. She told FOX 2’s Charlie Langton they heard gunshots and saw another student bleeding from the face before they all ran from the area through the back of the school.

Another student we spoke with, identified only as Savannah, said that the school conducts mass shooting training and they knew what to do.

A parent sitting in a car told FOX 2 that his student inside had to barricade inside a classroom when they heard the gunshots being fired inside the school. He said his son was not physically hurt.

According to an alert sent out to Oxford parents, an active emergency was reported at the school around 1 p.m. and it has gone into emergency protocols and put the school into lockdown.

By 2 p.m., students were being released and dozens of ambulances and emergency personnel arrived at the scene.

The alert sent to parents urged them not to come to the school at this time.

There are multiple units on the scene including SWAT and the aviation unit and the sheriff said the scene is still active.

Oxford is a village population of just under 3,400 about 30 miles north of Detroit.