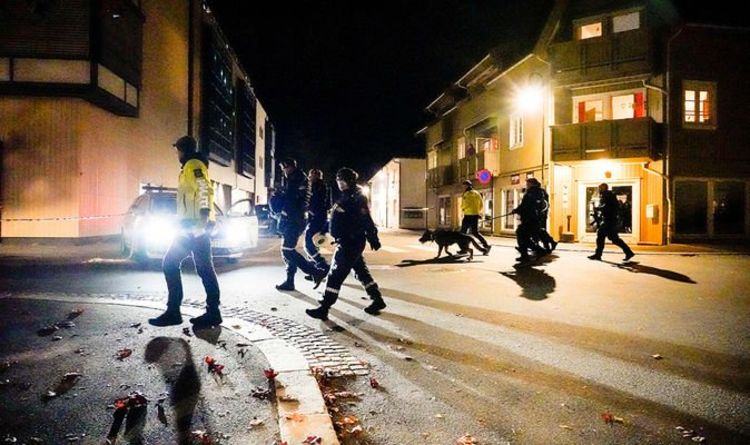 Norway is in shock this morning after an alleged lone perpetrator took to the streets of Kongsberg, south-west of the capital Oslo, on Wednesday evening with a bow and arrow, picking off victims as he roamed the streets. Prime Minister Erna Solberg said reports of the incident had been “horrifying”, as citizens are reminded of the horrors committed by Anders Breivik on Utoya island in 2011, when 77 people, most of them teenagers, were gunned down in a terror attack.

What do we know about the attacks so far?
1. The perpetrator is a 37-year-old man

A Danish man, aged 37, has been arrested and charged on suspicion of carrying out the attack.

The suspect was taken to a police station in the town of Drammen, where his defence lawyer, Fredrik Neumann, said he was questioned for more than three hours and was cooperating with authorities.

He added the suspect has a Danish mother and Norwegian father.

Police said the man in custody “is the only person implicated” so far.

Police attorney Ann Iren Svane Mathiassen told news agency NTB: “He is admitting to the facts of the case.”

2. The attack was in his home town

The attack took place at around 6.15pm local time on Wednesday in the suspect’s home town of Kongsberg, around 80km south-west of the capital, Oslo.

The killing spree is thought to have started in or near a Co-op store in the city centre, but a clear picture has not yet emerged.

3. The attacks covered a large area

Police said there were several crime scenes spread across “a large area” of the town.

Exactly how the attack unfolded is still unclear – police have said there are multiple crime scenes across a large area of the town of 28,000 people.

6. The motive is still unclear

Norway’s Justice Minister Monica Maeland told reporters the police did not yet know whether or not it was act of terrorism and could not comment on details emerging about the suspect.

The police prosecutor, Ann Irén Svane Mathiassen, told TV2 that the man had lived in Kongsberg for several years and was known to police.

Police chief Oyvind Aas said: “It is natural to consider whether it is an act of terrorism” but added it was “too early to come to any conclusion”.

Police have no indication so far that there is a change in the national threat level.

Acting prime minister Erna Solberg described reports of the attack as “horrifying” and said it was too early to speculate on the man’s motive.

Prime minister-designate Jonas Gahr Støre, who is expected to take office on Thursday, called the assault “a cruel and brutal act”.