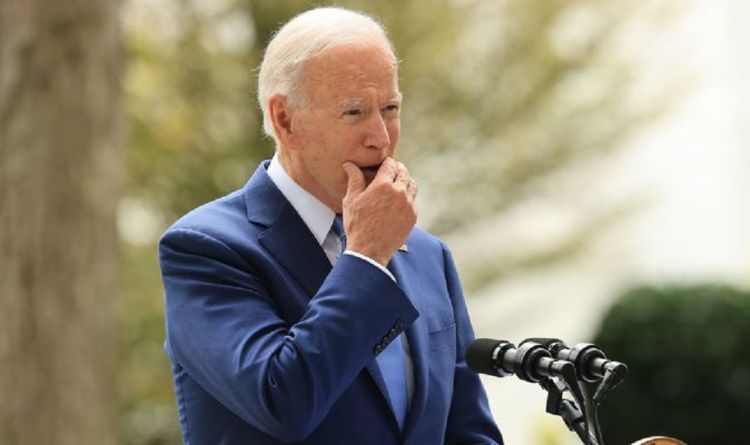 President Biden delivered an error-ridden speech during an appearance in Illinois where he confused names, genders and places at an event intended to raise the importance of vaccines. But his handling of the speech sparked received heavy criticism for its haphazardness and confusing direction.

Speaking at the event, the President mumbled names and stuttered heavily as he reeled off his thanks to various figures for their work on vaccines in Illinois.

But in one bizarre moment, the President says: “Ohio… Pennsylvania… the, the, the Illinois president Don Harmon!”

He adds: “Erm, erm erm, Martin Moylan… and we have got great leadership…”

He added: “What do you think Russia and China, let alone the Taliban are saying!”

The mishaps were however not the only howlers in what became a totally rambling address where Mr Biden ended up branding female Chicago Mayor Lori Lightfoot ‘Mister’.

While later on, the President of the United States confused a television for a telephone when he told viewers about a conversation he had with a hospital worker.

He said: “Last night I was on the television, on television…

The TV host then slams “God help us” as he watches footage where Mr Biden continues to get names and places mixed up before making a claim about employment in the USA.

But his visit comes at a time when his public approval rating has nose-dived.

Rasmussen’s most recent poll suggested Biden’s approval rating currently stands at -12 percent as the President rides out the legacy of the deadly Afghanistan withdrawal and a spiralling employment crisis in the States.