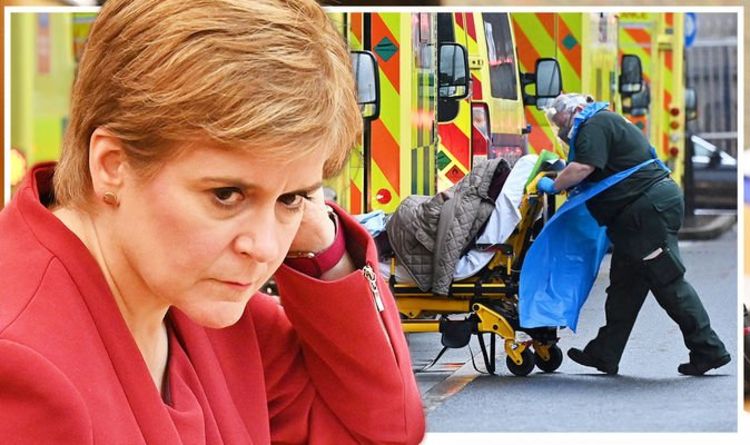 A total of 39 cases were traced to a Nike conference held in Edinburgh held between February 25 and 27, 2020 as Ministers recorded less than 10 deaths. Jeane Freeman, the SNP-led Scottish Government’s former health secretary and Gregor Smith, who was deputy chief medical officer at the time, supported full disclosure of the incident to Scots.

However, Nicola Sturgeon ignored advice from Mr Smith and Ms Freeman and decided to side with former chief medical officer Catherine Calderwood, who urged the Scottish First Minister to keep the outbreak secret due to patient confidentiality concerns.

Full details of the outbreak which took place at Edinburgh’s Hilton Carlton hotel were later revealed in a BBC Scotland documentary.

In an email obtained by a Freedom of Information request, Liz Lloyd, Ms Sturgeon’s chief of staff said the outbreak was potentially “a legitimate public interest matter” on March 5.

She advised the Scottish First Minister that full disclosure “could be reassuring information for the public around the increase in numbers”.

But on March 6, Ms Calderwood who later resigned after breaking her own COVID-19 guidance said in a separate email that going public could breach patient confidentiality and hamper contact tracing efforts.

Opposition Holyrood politicians have now demanded the Scottish First Minister’s decision to ignore some close advisers must be scrutinised at a public inquiry into the handling of the COVID-19 pandemic.

Jackie Baillie MSP, deputy leader of Scottish Labour, said: “These revelations must be scrutinised fully by any public inquiry.

“Whilst we knew Calderwood had advised against transparency on grounds of patient confidentiality and the first minister sided with her, it hadn’t been appreciated until now that the first minister did so against the advice of her own health secretary and chief adviser.”

He said: “The First Minister repeatedly denied that the government had kept quiet about the Nike conference when news first broke.

“It seems that was a lie. Information was deliberately kept from the public that would have offered early warning and likely saved lives.”

“These are further damning revelations about the earliest known outbreak of the virus in Scotland.

“There should have been full transparency from the First Minister and the SNP Government at the earliest opportunity.

“As someone working in the health service as Covid struck, I know we would have been able to respond better if we knew exactly what we were dealing with and when.”

Alex Neil, who served as Scottish Health Secretary under former First Minister Alex said there should have been “maximum transparency” at the time of the Nike Conference.

Professor Rowland Kao, chair of epidemiology and data science at the University of Edinburgh, said at the time the Nike outbreak occurred, the risks regarding worldwide spread of COVID-19 were “already quite apparent”.

He added to The Sunday Times: “There will always be trade-offs, but an awareness of a large outbreak in Scotland independent of the first reported case [on March 1, 2020], would have made it clear that other outbreaks could be occurring or would be soon with risks of substantial transmission.”

It comes after a long-awaited incident management team (IMT) report into the outbreak revealed 23 cases were among people who attended or were directly linked to the conference and 16 were close contacts.

The Public Health Scotland (PHS) report, published last week, admitted some asymptomatic infections caused by the outbreak may have been missed due to testing policy at the time

Officials also said in the report that no “hot debrief” took place, a key part of a direct response to public health incidents.

This meant no formal recommendations were made to Scottish ministers or to local authorities about how to improve the handling of Covid outbreaks based on lessons learned.

Ms Sturgeon has repeatedly denied the outbreak was covered up but made clear that she understood concerns over the way information about the cases from the conference were handled.

In response, a Scottish Government spokesperson said: “All appropriate steps were taken to ensure public health was protected following the Nike conference, with more than 60 contacts traced in Scotland, and around 50 others traced in England.

“All of the cases linked to this event were assessed by their close contact, or contact with conference delegates who tested positive after the event so public health authorities were satisfied that there was minimal infection risk.

“All Scottish cases linked to this event were contact traced and reported in details of the number of cases in Scotland at the time.

“While the Nike conference in Edinburgh was one of several routes by which COVID-19 came to Scotland, the University of Glasgow’s genome sequencing report confirms that the local public health response was effective in managing and containing spread of that particular strain of COVID-19 in Scotland.”