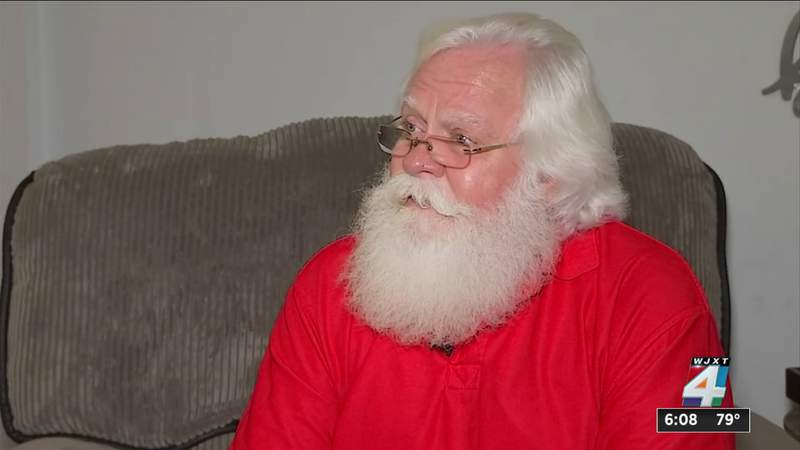 JACKSONVILLE, Fla. – Thursday marks 72 days until Christmas, but already Santa Claus is out of work due to COVID-19 vaccine requirements.

A local man who portrays Santa was set to take on the role and even had a contract. But now, he has learned that without a vaccine, he’s on the naughty list.

“I was really looking forward to it, you know? I love the kids. I love the sense of self-worth,” said Santa Ron, who asked News4Jax not to use his full name in order to keep the illusion alive for the children.

Ron told News4Jax that he just learned one of his jobs was canceled because he is not vaccinated. It was a breakfast with Santa appearance at the Nordstrom at the St. Johns Town Center for two days in December. He said he had a contract, but the booking firm out of Las Vegas called and told him to stay home.

“She just told me she couldn’t use me. She didn’t want me showing up on the 8th and the 11th being turned away and not receiving pay. It wasn’t easy. She didn’t offer to honor the contract or anything,” he said.

News4Jax checked with the firm called Nationwide Santa. It had no comment. Ron said he learned it was Nordstrom that made the decision.

News4Jax asked Nordstrom about its policy and received the following response:

“The health of our customers and employees continues to be our priority and our approach to COVID-19 is driven by guidance from the CDC, as well as local and state requirements. Getting vaccinated is one of the most important ways we can take care of our customers and each other. We strongly encourage everyone to get the COVID-19 vaccine if they’re able to do so. We are not requiring customers to be vaccinated to shop or dine with us except where required by a local health order.”

The spokesperson added, “Santas at our Holiday Breakfasts will be vaccinated.”

When asked why he doesn’t want to be vaccinated when the Santa role would have him around children, Ron said: “I am not a conspiracy theorist. I don’t believe it’s the mark of the beast. I don’t believe nobody’s going to be tracking me.”

Ron said it’s a health issue for him. He said he’s had a bad reaction before to certain shots. He not only reached out to us but has written the governor’s office, as well.

“What makes me mad is I signed a contract. If they had been upfront with me to begin with, I would not have the issue that I’m having,” he said.

He will continue his Santa role at other places.

News4Jax has been checking with local malls about their Santa policies. As of Thursday afternoon, we were waiting to hear back from most. We did learn that The Avenues and Town Center will have Santa appearances, but there’s no word yet how those are going to work.