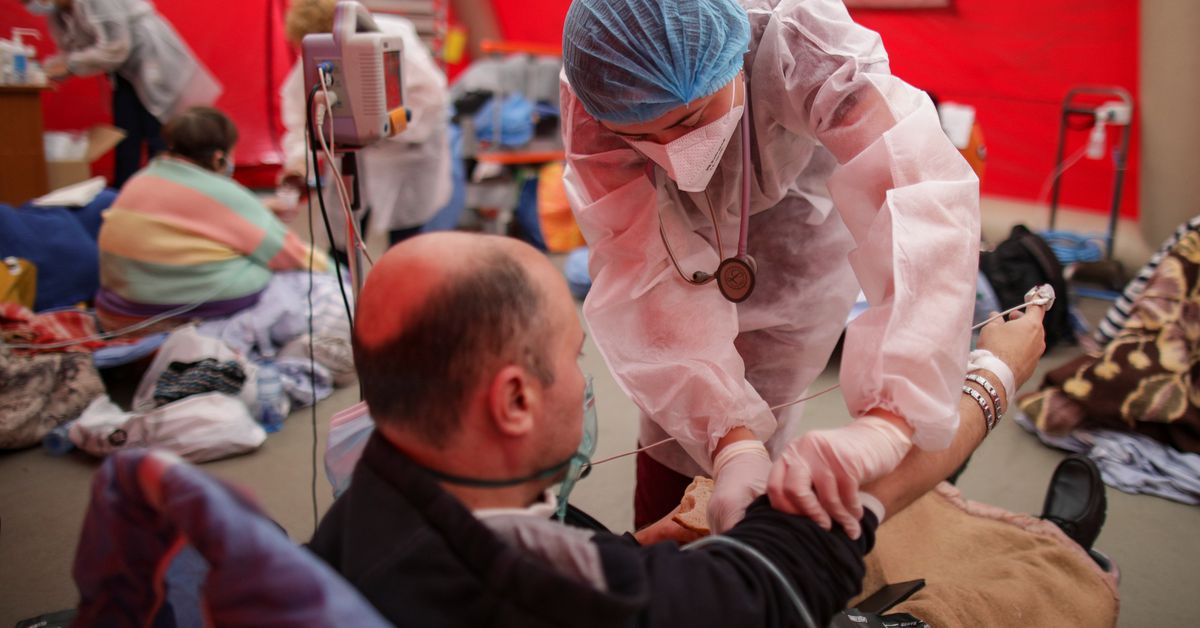 ADUNATII-COPACENI, Romania, Oct 11 (Reuters) – In leafy Romanian villages surrounding the capital Bucharest, few people realise one person has died from COVID-19 every six minutes in the country during the first 10 days of October, and vaccine scepticism remains high.

These villages have some of the highest COVID-19 infection numbers and lowest vaccination rates in the country, which is being ravaged by the fourth wave of the pandemic, with ambulances queuing outside hospitals filled to the brim.

Daily transmission numbers are rising across Central and Eastern European states, and Romania is experiencing record case and death rates as it grapples with the European Union’s second-lowest vaccination rate.

In Adunatii-Copaceni, 20km south of Bucharest, 69-year-old Ion Dinu said he and his wife Maria spend most of their time working in their garden, growing tomatoes, peppers and herbs and not coming into contact with many people.

While he has taken a flu vaccine in the past, he said television programmes have questioned the effectiveness of COVID-19 shots.

“I am not saying I am against it,” he said next to a produce stand outside his house. “I am just not firmly convinced it is as efficient as the flu vaccine, there hasn’t been enough time to gain experience with it.”

Dinu said he would get vaccinated if his neighbours or family became infected, but not everyone in the village would.

Denisa, an 18-year-old high school student whose cousin died recently, fears the side-effects of the jab.

“Even if all of us had gotten vaccinated we would still be in this situation, you can still get infected,” she said.

Official data showed more than 70% of confirmed infections were in unvaccinated people, as well as 93% of deaths.

Roughly one in seven people in Adunatii-Copaceni have had a COVID-19 vaccine, less than half the national average, and on Sunday, 15 people out of a thousand were infected.

“We continue being on a battle field, unfortunately,” said Adrian Marinescu, medical director of the “Matei Bals” national institute for infectious diseases in Bucharest.

“Vaccination is often the difference between life and death for a vulnerable person.”

Bulgaria and Romania have the EU’s lowest immunisation rates, with 23.4% and 34.1% of their adult populations fully vaccinated, amid entrenched distrust in state institutions, misinformation campaigns, poor rural infrastructure and weak vaccine education.

Both countries are enmeshed in political crises, with Bulgaria gearing up for its third parliamentary election in less than a year and Romania’s centrist government toppled in a no confidence vote last week. read more

“People still don’t realise what is going on, they’re still taking it as a joke. This is the level of education we have as a nation. We don’t believe it until we die.”