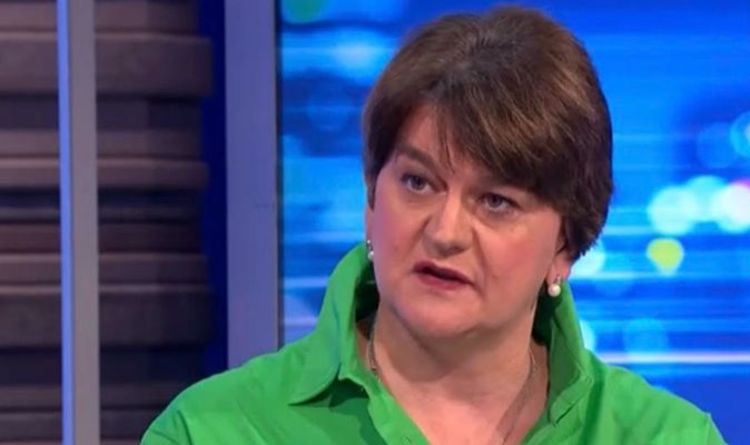 The former Northern Ireland first minister told Robert Peston that despite the apparent shift in progress to solve the protocol crisis, there are many issues within the European Union’s proposals for a renegotiating the deal and demanded it is scrapped altogether. She insisted the bloc need to show respect for Northern Irish sovereignty with their decision making as she warned of a backlash against bloc’s continued efforts to limit Northern Ireland’s future outside the EU.

“There is nothing about the sovereignty of Northern Ireland and the fact the final arbiter is still going to be the European court of justice!”

She agreed with Lord Frost, the chief Brexit negotiator, who said on Wednesday that there is not much point “tinkering at the edges” to solve the protocol crisis.

The former DUP leader slammed: “What we need is fundamental change… it’s a bit late, but I welcome that to be the case.”

When asked whether she agreed with scrapping the entire Northern Ireland protocol Ms Foster agreed.

She said: “I think that Lord Frost agrees as well, he has put forward a new legal text that he believes will provide the answers.”

Ms Foster continued: “The EU also said, of course, they wouldn’t do negotiations on the protocol – they always say they are not going to do something until the point they actually do something!

“What they need to do is actually respect the sovereignty of the United Kingdom and let us move forward on that basis!”

The comments come as chief Brexit negotiator Lord Forst has vowed to enter “intensive talks” with the EU on Brexit after Brussels presented its Northern Ireland Protocol plans, in a bid to prevent trigger Article 16.

If no agreement can be found, Lord Frost is ready to take the “nuclear option” by triggering Article 16 and suspending the mechanism introduced as part of the 2019 Withdrawal Agreement.

The proposals will mean most food products will not need to be physically checked when arriving into Northern Ireland from Great Britain and a cut to the required administration for Northern Ireland importers is being brought in.

There will also be expanded trusted trader arrangements meaning more products and companies are exempt from customs tariffs.

While the EU have pledged improved engagement with stakeholders in Northern Ireland including politicians and business groups.

The proposals come as Mr Šefčovič is planning to head to London for crunch Northern Ireland protocol talks first thing on Thursday morning.