After spending several weeks in a crowded hospital in eastern Jiangsu province caring for her 53-year-old father as he succumbed to Covid-19 induced pneumonia, Wang was shocked to learn the disease that took his life on Saturday could not be printed on his death certificate.

“It’s absurd, someone dies and we can’t even accurately write the cause,” the 23-year-old said, asking to be identified only by her surname.

Since the lifting of zero-Covid controls in China, hospitals have been inundated with patients and crematoria have struggled to keep up with demand. As a result, many analysts have expressed surprise that the official death toll is not higher.

In the period from December 8 to January 12, the official death toll was 59,938, according to revised figures for deaths in healthcare facilities put forward by the National Health Commission last weekend, up from its initial claims of just 37 deaths.

Airfinity, a health data analytics group, estimates the death toll to be 10 times that figure, or 641,000 deaths, assuming 104mn infections in the month up till January 18. Researchers at Peking University say China may have already seen as many as 900mn infections by January 11, but has not published an estimate for total deaths.

One possible reason for the lower than expected figures is that, according to several relatives and medical professionals across the country, Chinese officials are keeping “Covid-19” off the death certificates of many people who die with the virus.

Six relatives who lost loved ones to coronavirus in recent weeks said they were dismayed to see death certificates filled in with “pneumonia” or “heart disease” or other causes of death, instead of Covid.

Several medical professionals told the Financial Times that local officials had discouraged them from including coronavirus on the official documents either by complicating the process or by actively telling medical institutions not to include the words.

In Wang’s case, the hospital directed her family to a community clinic to process the death. Officials there typed in “viral pneumonia (unspecified)” as the official cause of death.

“They said we can’t include Covid, my mom was a little frustrated and questioned them — can ordinary pneumonia kill people . . . but we didn’t want to argue with them, so we just agreed to write pneumonia,” she said.

Her account is echoed by hundreds of people posting online and in interviews with family members who lost loved ones to Covid and asked not to be named.

In Beijing, the grandson of a man in his 90s who died in hospital after three days of a fever from Covid said doctors had pencilled in “heart disease”, his previous condition, as a cause of death. Another woman in the capital said her 93-year-old mother-in-law died after a 10-day stay in the hospital because of Covid but the family could only put “pneumonia” on the certificate. The granddaughter of an elderly man who died in eastern Jiangsu province owing to Covid-linked respiratory failure, said his death was officially attributed to “underlying disease”.

In northern Jilin province, a woman told the FT a scan showed Covid had ravaged her grandmother’s lungs, but the hospital would not allow a Covid test and officially categorised her death as due to “coronary heart disease”, a previous medical issue.

The omissions have spurred a litany of complaints on Chinese social media. “What are you trying to hide? Why is Covid a taboo? We had a positive test result, the truth is Covid,” said a Weibo user in Liaoning province.

These attempts to leave coronavirus off of death certificates call into question the reliability of China’s latest Covid-19 death figures, particularly given the delay in updating them.

Jiao Yahui, a top NHC official, on Saturday said it had taken a long time to publish the updated figure because hospitals had to comb their death records, producing a “relatively large amount of data and information” to analyse. She did not say if they had relied on death certificates and the NHC did not respond to a faxed request for comment.

Doctors who spoke to the FT said the official impetus to undercount Covid deaths was clear. An emergency medicine physician in a small city in southern Guangdong province said he and colleagues had been told: “Death certificates can’t include “xinguan” [Covid-19] these two characters.”

Another doctor at a big hospital in nearby Guangzhou added: “I don’t understand it, but this is what the [hospital] leaders told us to do. Perhaps it’s just to save face.”

In the Chinese capital, three nurses at community clinics charged with writing death certificates for those who die at home said they either did not have the “qualifications” to attribute a death to Covid or gave other reasons why they could not include it. “The most we can do is write ‘suspected Covid’ if they have a PCR test,” said one nurse in central Beijing. 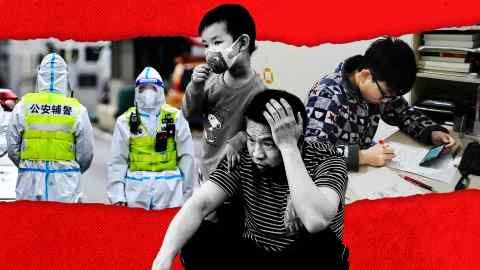 While a doctor at a big hospital in Shanghai said he had never received any direct order to omit Covid from death certificates, “they made it very strict and complicated”, to include, he said. “To include [Covid-19] the case needs to be reviewed by the local Center for Disease Control. There is no benefit at all from issuing this certificate with Covid on it,” he said.

For relatives of those who suffered with Covid, the failure to acknowledge the cause of death adds to what was already a traumatic experience.

Wang said the hospital where her father died was overrun with sick Covid patients. “Until the end he couldn’t get a ventilator. I felt helpless, we were at a hospital, but I wasn’t able to get my father treatment,” she said.