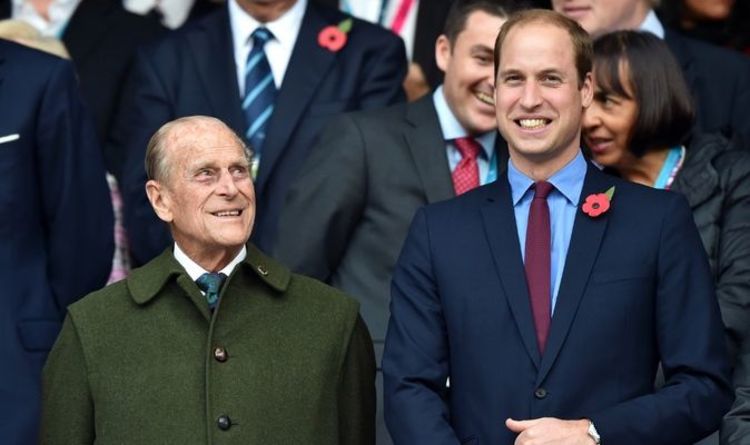 During an interview with the BBC’s chief political correspondent Adam Fleming, the Duke of Cambridge spoke openly about what the world needs to do to combat climate change. The national broadcaster aired Prince William’s 30-minute interview on BBC One on Thursday at 11.35pm.

However, during the Duke’s discussion with Mr Fleming, the most eagle-eyed royal fans may have spotted a touching tribute to the Duke’s late grandfather Prince Philip.

Slightly over Prince William’s right shoulder, viewers can see a photo of the Duke of Edinburgh and William’s eldest son, Prince George.

Prince Philip, who after 73-years of marriage to Queen Elizabeth became Britain’s longest-serving consort, passed away at the age of 99 in April 2021.

The photo, taken by the Duchess of Cambridge, shows Prince George holding a book while sitting in the Iron Duke’s horse-drawn carriage.

Known throughout his life for his love of racing, members of the Firm have spoken candidly about accompanying Prince Philip in his horse-drawn carriage.

JUST IN: Prince William reveals what Prince Louis loves to do in rare update on young royal

Prince William recently wrote: “I will never take for granted the special memories my children will always have of their great-grandpa coming to collect them in his carriage and seeing for themselves his infectious sense of adventure as well as his mischievous sense of humour!”

The snap, taken in 2015 in Norfolk, was previously shared by Prince William when he was paying respects to his late grandfather following his death.

Alongside the photo, the Duke of Cambridge wrote: “My grandfather’s century of life was defined by service – to this country and Commonwealth, to his wife and Queen, and to our family.”

“Catherine and I will continue to do what he would have wanted and will support The Queen in the years ahead.

“I will miss my Grandpa, but I know he would want us to get on with the job.”

While the Prince’s tribute to his late grandfather may have been spotted by more attentive viewers, Mr Fleming questioned the Duke about another ornament in Kensington Palace.

Sitting under the table where the photo of Philip and George was placed, the BBC’s chief political correspondent pointed out the Cambridges’ have a “weird dog sculpture”.

Speaking to BBC Breakfast yesterday, Mr Fleming said: “We were in Kensington Palace, some royal armchairs and little nik-naks around the room.

“This is including a little weird dog ornament and for part of the podcast we watched a little bit of the TV show that he made with David Attenborough.”

But Mr Fleming also used the interview at Kensington Palace to ask Prince William about environmentalism and his Earthshot Prize.

The Duke of Cambridge issued multiple warnings about the future of the planet.

“I want the things that I’ve enjoyed – the outdoor life, nature, the environment – I want that to be there for my children, and not just my children but everyone else’s children,” he said.

William added: “If we’re not careful we’re robbing from our children’s future through what we do now. And I think that’s not fair.”