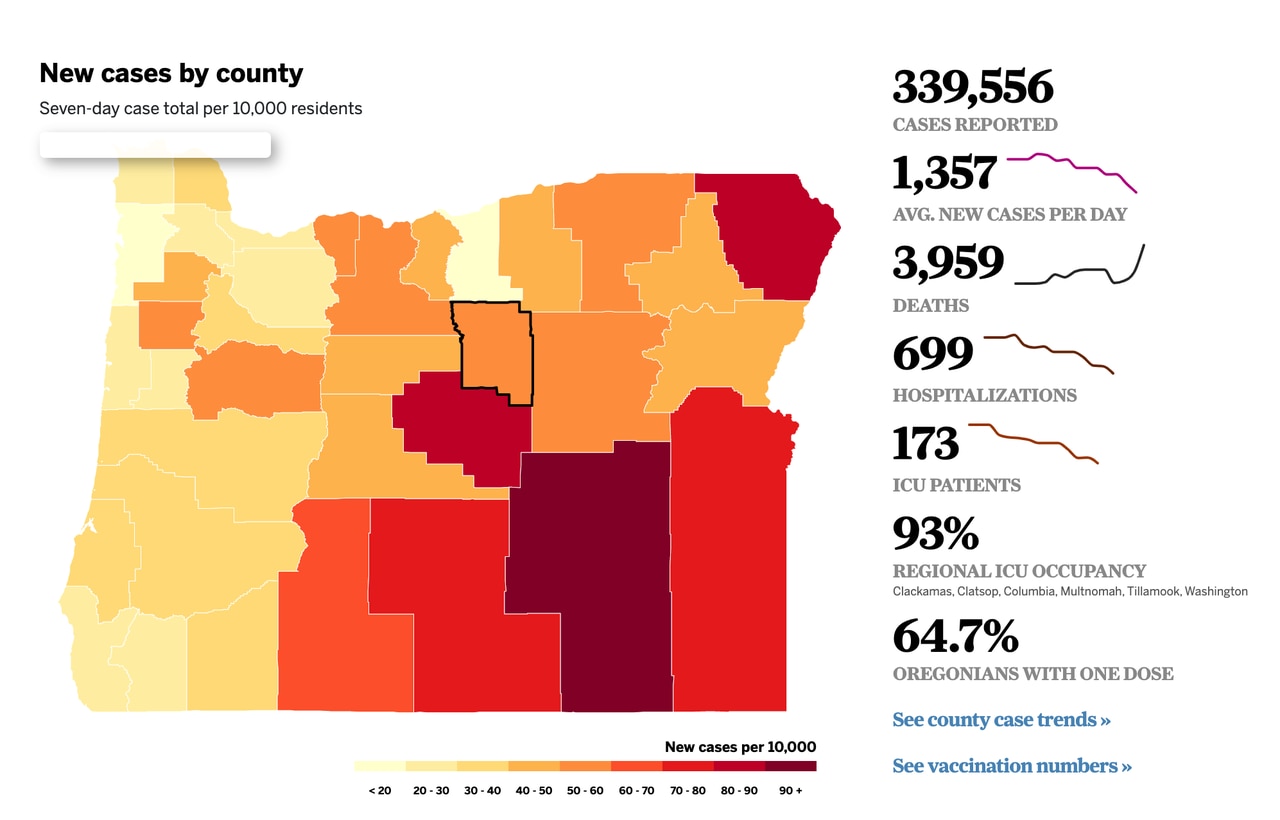 The Oregon Health Authority on Thursday reported more COVID-19 deaths — 59 — than it had reported on any previous day of the pandemic.

Officials haven’t yet released the dates of death for the 59 people. But it’s extremely unlikely they all died on the same day, given common delays in collecting and reporting data. In fact, Thursday’s tally might include some weeks-old fatalities that had gone unreported.

The previous record for most COVID-19 deaths announced in one day was 54 on Jan. 12 and again on Sept. 7.

Meanwhile, the health authority reported Thursday the number of new known daily cases continued to fall, to 1,453 cases, one of the lowest numbers reported on a weekday over the past two months.

Breakthrough cases: The health authority’s weekly report on breakthrough cases found that about 76% of infections identified between Sept. 26 and Oct. 2 were in people who were unvaccinated or partially vaccinated. Some 24% of known infections were in people who’d received one Johnson & Johnson dose or two doses of Pfizer-BioNTech or Moderna vaccines at least 14 days before they tested positive.

That amounts to 2,542 weekly breakthrough infections out of a fully vaccinated population of about 2.5 million Oregonians, versus 7,869 weekly infections among the roughly 1.7 million people who are unvaccinated or partially vaccinated.

So far in the pandemic, 4.5% of all people who’ve experienced a breakthrough case in Oregon have been hospitalized, and 0.8% have died, according to the health authority. Read the full report here.

Fatalities: Officials said they are still compiling information about location of residence, age and date of infection and death for the 59 people who died. That information will be reported at a later date.

Hospitalizations: Patients hospitalized with COVID-19 dropped to 699, down 31 from the previous day. Patients in intensive care units decreased by 14, to 173 Thursday.

Vaccines: Oregon reported 3,405 people have been vaccinated for the first time since Wednesday.

Since it began: The state has reported 339,556 confirmed or presumed infections and 3,959 deaths, among the lowest per capita numbers in the country. To date, officials say 5,221,822 vaccine doses have been administered, 2,543,105 people have been fully vaccinated and 219,274 people have been partially vaccinated.

Dave Cansler contributed to this report