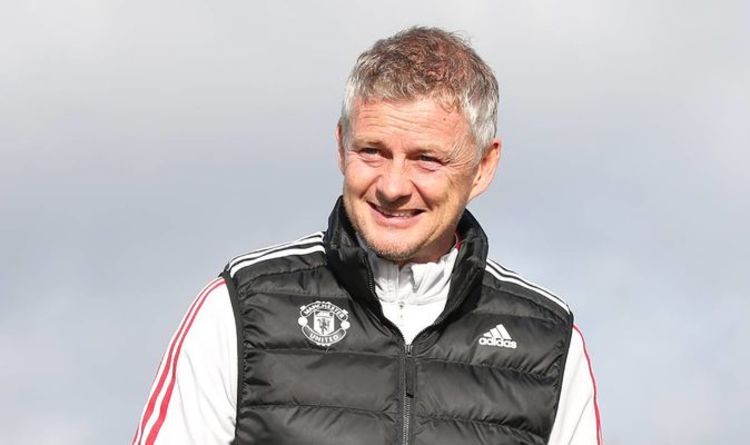 Manchester United have handed eight youngsters the chance to impress Ole Gunnar Solskjaer as the club prepares for the return of the Premier League this weekend. United trained at their Carrington base today, but with so many players away on international duty Solskjaer drafted in some unfamiliar faces.

Like many Premier League sides, United currently have several players away with their countries playing World Cup qualifiers.

Among others, United are without England’s Jadon Sancho, Jesse Lingard and Luke Shaw, France duo Raphael Varane and Paul Pogba and Cristiano Ronaldo and Bruno Fernandes, who are away with Portugal.

But despite missing some of their biggest stars, training has to continue ahead of Saturday’s trip to face Leicester City.

So to make up the numbers, Solskjaer called up a group of the club’s best Under-18s and Under-23s to train with the first team.

The 23-year-old striker returned to full-contact training on October 1 and he also scored twice in a behind-closed-doors friendly against Blackburn Rovers recently.

There are problems brewing in central defence for Solskjaer, however, who has injury problems to consider for this weekend’s match.

Captain Harry Maguire is sidelined with a calf injury and his centre-back partner Raphael Varane picked up an injury in France’s 2-1 win over Spain in Sunday’s Nations League final.

Varane is yet to be properly assessed, but he is a doubt for Leicester, meaning Victor Lindelof may have to play alongside Eric Bailly in defence.

Lindelof is currently away on international duty with Sweden, who play Greece in Stockholm on Tuesday, while Bailly will return to Manchester after playing in the Ivory Coast’s 2-1 win over Malawi on Monday night.