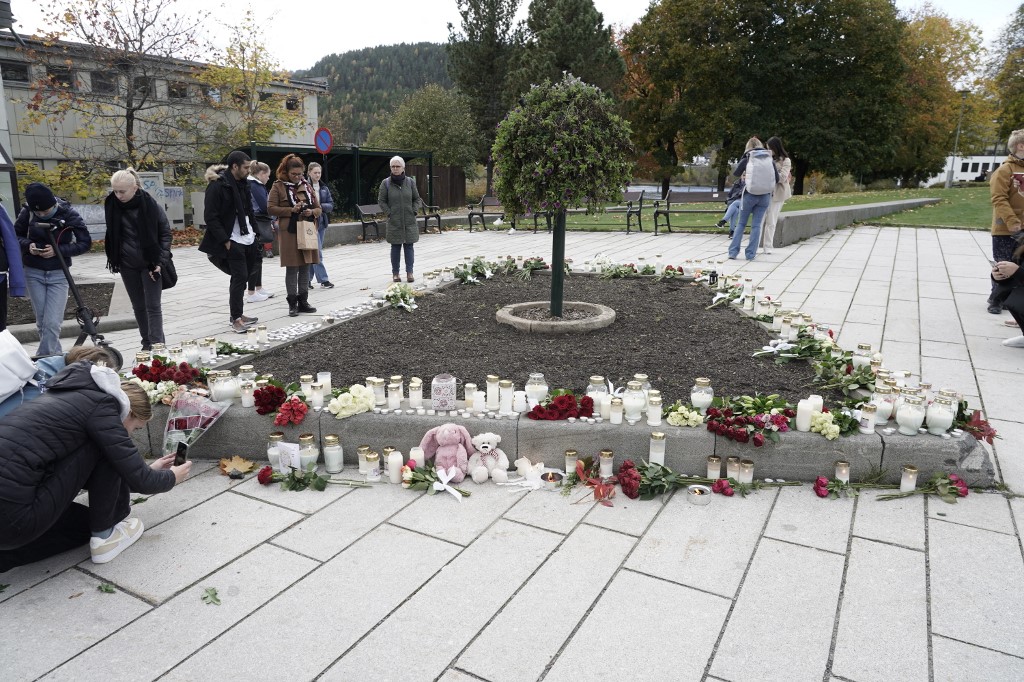 Inhabitants set up flowers and candles in the centre of Kongsberg, Norway, on October 14, 2021, the day after a man armed with a bow and arrows killed five people before being arrested by police. — AFP pic

KONGSBERG, Oct 14 — Knut Olav was about to have a cigarette when a familiar sound pierced the air of his bucolic Norwegian town, reeling today after a man with a bow and arrow went on a killing spree.

A former avid archer, 54-year-old Olav knew what that sound was immediately.

“I saw a friend of mine cowering behind a car and then suddenly heard a ‘thung’,” he told AFP. “I could hear the tingling of the arrow hitting the streets. And after that I could see a man drawing a kid out of a car and running towards my house.”

Residents in the hilly town Kongsberg, home to 25,000 people in southeast Norway, were left stunned when a Danish man, living in their midst, went on a rampage yesterday killing five people and wounding three others with a bow and arrow.

The deadliest attack in Norway in a decade, intelligence officers said today it was being treated as an “act of terror”.

A 37-year-old Dane, whom police described as a Muslim convert previously known for suspected radicalisation, has been arrested. He had lived in Kongsberg for several years.

Armed with a bow and arrow, he walked through town indiscriminately targeting victims at a store and in the street. Those who died were all aged 50 to 70. Four of them were women.

Police got the call at 6:13 pm, just as the sun was setting on the town, awash in autumn colours at this time of year.

Hard to imagine a less likely setting for a killing spree.

“I thought it was Kabul,” said Thomas Nilsen, who was at home when he heard terrified screams.

Svein Westad was getting dinner ready when he heard screaming and gunfire outside his window — likely the warning shot that police said they fired.

“I continued to cook. There was no way I could go out,” he said.

In a small town, the violence cut close to home.

Westad believes the suspect was arrested in his neighbour’s yard. He knows one of the victims, another neighbour who lived down the road.

“I called the police who told me to stay at home. Suddenly, it was even less of a question whether I would go out”.

Ten years ago, Norway was in the headlines for its deadliest attack in post-war history after far-right extremist Anders Behring Breivik killed 77 people, many at a youth camp.

But people in Kongsberg never imagined such horror could reach them.

“I can’t believe it happened in a small town like this,” said Vigdis Hanson, 50, who is unemployed. “I hope I don’t recognise any of those who were killed.”

By today, few remained — some posted outside a supermarket where the attacker struck, a glass window still damaged — while forensic detectives were also spotted.

Outside a local church, candles flickered in honour of the victims.

At least one person, an off-duty police officer, was injured inside the supermarket during the attack. Before his arrest, the suspect shot at police with his bow and arrows.

Police have yet to name the five victims.

“I heard the cries of children, barking and then the sound of helicopters circling around my house,” he told AFP.

He was still uneasy as ventured out to go food shopping today.

“I was looking a little over my shoulder,” he confessed.

The attacker is due to appear go before a judge tomorrow, likely to be remanded into pre-trial detention.

In the meantime, Kongsberg is trying to make sense of the horror.

“I know some of the people and I met the guy they say is the guy that did it,” Jacob Flarvall, a 38-year-old restaurant owner, said.