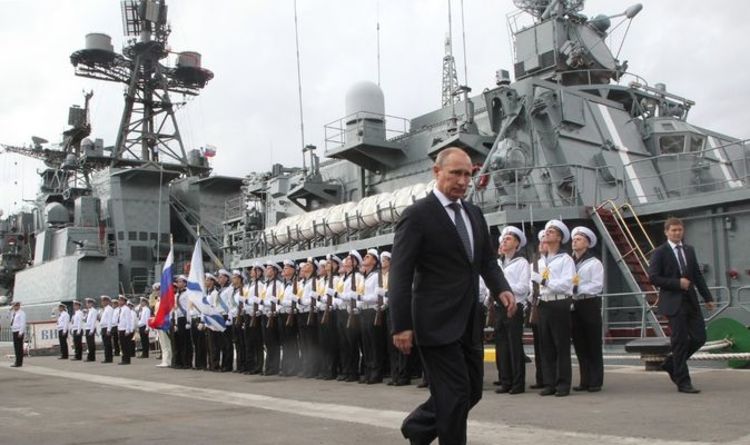 In a statement via its defence ministry, Moscow unleashed a furious tirade on the US following the close naval encounter despite Washington pleading the interaction was “safe and professional.” Russian-Chinese naval drills were ongoing in the Sea of Japan on Friday, when, according to Russia, the crew of a Russian anti-submarine vessel, the Admiral Tributs, radioed a warning to US naval destroyer USS Chafee that happened to be near the same zone.

The Russian defence ministry said its team warned the American vessel that it was “in an area closed to navigation due to exercises with artillery fire.”

The Chafee did not manage to change course immediately as it was preparing to launch a helicopter from its deck.

Unable to turn or change speed as part of the protocol, the naval destroyer raised flags to indicate a take-off was pending.

“Acting within the framework of the international rules of navigation, the Admiral Tributs set a course for ousting the intruder from Russian territorial waters,” said Army General Sergey Shoygu, the Russian defence ministry, in his statement.

The Chafee eventually changed course but at some point, the two vessels were less than 60 metres apart according to Moscow.

The incident lasted about 50 minutes and took place in Peter the Great Bay in the west of the Sea of Japan.

RIA news agency said the Russian defence ministry summoned the US military attache, who was told of the “unprofessional actions” of the destroyer’s crew, which had “rudely violated international laws on the prevention of collisions of vessels at sea”.

However, the US Indo-Pacific Command has denied such allegations.

In a statement, they claim the guided-missile destroyer Chafee was conducting routine operations in international waters in the Sea of Japan when a Russian destroyer came within 65 yards (60 metres) of the American ship, though all interplays were “safe and professional.”

“The statement from the Russian Defense Ministry about the interaction between our two Navy ships is false,” they said.

“At all times, USS Chafee conducted operations in accordance with international law and custom.”

The incident appears to reflect Moscow’s intention to raise the stakes in deterring the US and its allies from sending their ships on missions near Russian waters, as relations between Russia and the West are at a post-Cold War low.

In June, Russia said one of its warships fired warning shots and a warplane dropped bombs in the path of a British destroyer to drive it away from Black Sea waters near the Crimean city of Sevastopol.

The British Ministry of Defence denied that account and insisted its ship wasn’t fired upon as it was sailing in Ukrainian waters.