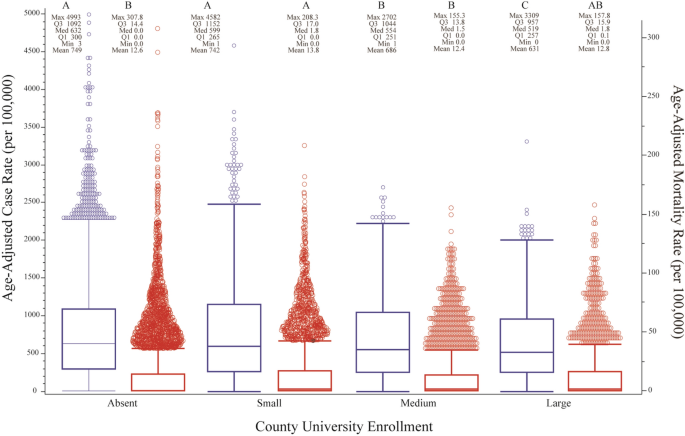 A retrospective analysis evaluating 15 months of cases and deaths caused by COVID-19 reveals small, but significant reductions in cases among counties with increasing university enrollments. However, little to no change was noted with respect to mortality rates. Further analyses focused on differences between age groups also reveal little to no variation in the case and mortality rates of each group across university enrollment size. However, notable age-related trends were discovered. First, the highest case rates were among young to middle-aged adults (20–59), with 20–29-year-olds experiencing the highest case rates than any other age group—a finding also found by Monod et al.30 Second, although the 0–9 and 80+ year old age groups experienced the lowest case rates, the 80+ year old age group’s risk of death was substantially higher than all other age groups. These trends corroborate the widely observed findings pertaining to COVID-19 fatality31,32.

Our sub-group analysis of COVID-19 mitigation strategies for the Fall 2020 semester provide further evidence that colleges and universities were not associated with increases in county-level cases—even before cohesive containment plans were established. The cluster analysis identified that schools identified in Cluster 2 tended to be larger, land grant universities that maintained entirely online or hybrid course instruction during the Fall 2020 semester and were likely to be in counties with lower population-adjusted COVID cases. These schools were more likely to have mandatory student testing that was significantly associated with overall lower county cases numbers. During the Fall 2020 semester, county and state-level factors (e.g., mask usage, mask mandates, and median household income) were far more significantly predictive of overall county-level cases, which held true during the larger analysis period.

In addition to the differences noted above, public health decisions were dependent on several political, economic, and social factors. It is apparent that this pandemic has fueled divisions along political lines, which influenced both public health decisions and compliance. From adherence to social distancing and mask wearing to vaccination rates, political associations appear to be a strong influencing force33. Using the 2020 U.S. Presidential election as a proxy for determining a county’s political affiliation, the associations of COVID-19 cases and deaths are moderately correlated (Figs. S1 and S2). Counties with higher university enrollments are also correlated with increased overall education rates, which have been found to be associated with use of pandemic control34,35,36.

To date, several studies have analyzed the risk of transmission associated with universities and/or college-aged populations, but all have been limited to no more than 4–5 institutions2,7,37,38. Furthermore, very few studies have estimated the attributable risk between universities and students within the communities they reside39. Studies that did address community transmission and associations with students were systematic reviews, mathematical simulations, and/or consisted of elementary or primary student ages10,40,41. Our retrospective analysis is novel in that all data collected is specific to our central question, narrowing the scope of our investigation to produce tangible estimates of transmission risk at high spatial and temporal scales.

This study is limited in its analysis by aggregating non-lineage-specific individual-level COVID-19 case data to county of residence. By doing so, generalizations are made across varying population sizes and COVID-19 strains and cannot capture subtle differences. Numerous reporting agencies submit varying levels of completeness to the CDC, leading to a high potential for ascertainment bias. Additionally, due to the rapid onset of cases, particularly through peak wave periods, significant delays in reporting also occurred. This analysis attempted to establish etiologic-specific onset dates given the data made available. In some cases, differences of 1 + week from reported onset date to actual, true onset date likely exist and are unavoidable. However, the data account for a significant portion of the U.S. population, thus reducing the errors in generalization and representing the best source for such a study. Limitations to the sub-group analysis included an incomplete picture of mitigation strategies for some of the universities (e.g. Cluster 1 was defined by schools that did not fully report their COVID-19 plans). Counties without higher-education enrollments were also severely limited in this dataset, which could have impacted the analysis. We also assumed the mitigation plans to be static over the course of the Fall 2020 semester due to the lack of available data of changes. Given that this was the first semester with some schools in person, we felt it was likely that a university would maintain proposed plans, and if changes occurred, they would be to bolster mitigation, not reduce.

This study incorporates key differences among American counties stratifying across a spectrum of enrolled university students. In general, counties with increasing enrollment populations tend to be more populated and urban. As such, several potentially important factors associated with COVID transmission, reporting, and knowledge, attitudes, and practices have been generalized or overlooked. Future studies would provide a great service to public health by expanding on the methodologies and results of this study on several of these key factors. For example, counties with large university enrollments appear to have many key protective factors in place to mitigate COVID-19. However, these counties also contain significantly larger populations of black, indigenous, and people of color (BIPOC) that suffer from disproportionate racial and health inequities. Consequently, social vulnerabilities are significantly higher in counties with large university enrollments. Preliminary analyses of this dataset, in respect to COVID-19 outcomes by race and ethnicity, suggest corroborative evidence of these inequities (data not shown). Future studies should also evaluate the co-evolution and/or competition between COVID-19 and other respiratory viruses, particularly seasonal influenza and respiratory syncytial virus conducted in a similar longitudinal analyses as this study.