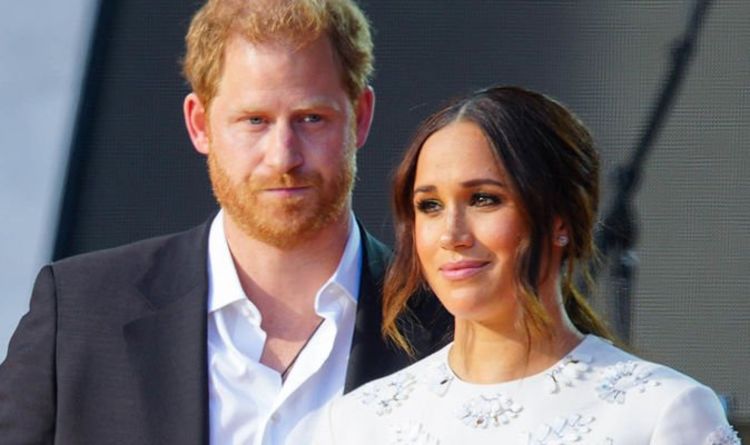 Meghan Markle, 40, and Prince Harry, 37, went to New York to attend the Global Citizen Live concert in Central Park at the end of September. While in the city, the Duke and Duchess of Sussex also met with New York mayor Bill de Blasio and governor Kathy Hochul. But NBC royal correspondent Neil Sean has warned the couple of schedule conflicts with the Royal Family if they were to travel to the same places.

Mr Sean claimed: “It’s very difficult for Harry and Meghan because being ex-royals and people wanting to meet them, they cannot really go undertake as an official royal visit.

“The problem a lot of people felt was in New York, people were confused. Was it a royal visit or wasn’t it?

“What a lot of people are also asking is this going to become confusing for instance when Prince Charles alongside William and Catherine do make those trips over to America?

“Simply because at the same time if Harry and Meghan choose to pop up and do their media blitz, people are really confused.

“If Harry and Meghan want to undertake these visits and host such high profile events, they must inform the palace in advance.”

The couple visited the city’s memorial for the September 11, 2001, attacks on the World Trade Center.

WNBC reporter Romney Smith recalled how Meghan and Harry’s photographers and media were outside of the media huddle.

Deputy Secretary-General of the UN Amina Mohammed said she has been speaking to Harry and Meghan about the issue among other fields they “care about deeply” including climate action and mental health.

This comes ahead of their attendance at Global Citizen Live, which is being staged in New York’s Central Park and around the world, and calls on leaders to adopt a vaccine equity policy.

The couple were pictured in front of the UN logo alongside Ms Mohammed on Saturday, with Meghan wearing a beige blouse and trousers with an auburn jacket, and Harry wearing a black suit and blue tie.

Ms Mohammed, the former environment minister for Nigeria, shared the picture in a tweet, saying: “In conversation with the Duke and Duchess of Sussex. Sharing how to engage on issues we care about deeply: climate action, women’s economic empowerment, mental well-being, youth engagement and vaccine equity.”