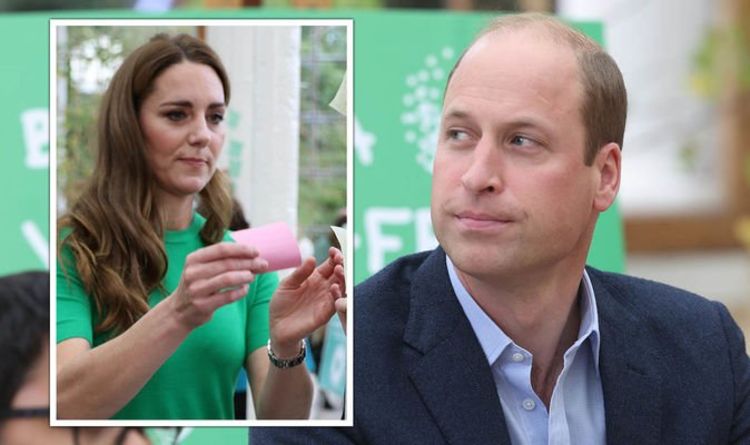 Kate and William headed to Kew Gardens in west London on October 13 to keep the spotlight on the Duke of Cambridge’s commitment to fighting the main environmental challenges of our time. At Kew, they sat down with children from The Heathland School, in Hounslow, and brainstormed ideas focused on solving crises such as pollution and climate change.

And their commitment and approach to this work were highly praised by the A-listers who took part in the engagement with them.

Mr Backshall told Town & Country magazine: “They sat down with the kids and they listened to them and they worked with them for half an hour.

“They didn’t come in here for a photo op, they came here to sit, talk to and listen to kids.

“It is from the heart, it’s real it’s genuine, and people get that and they connect to it.

“It’s very easy, particularly if you are someone in their kind of position, to just add your name as a tag to a big project then have nothing to do with it.

“But they’re not doing that, they are living it, they’re owning it, and I think people will respond to it.”

During their visit, Kate and William urged children to come up with creative ideas as part of the Generation Earthshot initiative, an offshoot of Prince William’s Earthshot Prize.

Over the next decade, the Prize will award a total of 50 individuals, governments or groups able to come up with workable solutions to five major threats to the environment.

The first award ceremony is taking place on October 17 at London’s Alexandra Palace, and is expected to be attended by celebrities and climate activists alike.

On the other hand, Generation Earthshot isn’t a competition, but still invites children aged over 10 around the world to think about the best solutions to help repair our planet.

The fact William and Kate are directly involved with Earthshot gives the initiative “credibility” and surrounds it with “a buzz and excitement”, according to British Olympic rower Helen Glover who was also at Kew yesterday.

She said: “We felt it when they walked in the room and the children all get excited because they think what we’re doing is so important.

“And when a child feels important and feels elevated they know that they can make a change, they’re listened to.

“They’re not only listened to by the people around them, which is crucial, but they are listened to by people who are on that centre stage in our country.

“And I think that’s just so empowering.”

In a statement issued by Kensington Palace after yesterday’s visit to Kew Gardens, William outlined the importance of involving children in the fight for the planet.

He said: “Education is such an important part of protecting our planet.

“We must inspire in the next generation the optimism, confidence and enthusiasm to chase those solutions and to continue building a more sustainable future.

“We know that young children already identify the climate as one of their biggest worries, and Generation Earthshot aims to educate and encourage them that together we can find the answers.”

William is to make another public appearance in the run-up to Sunday’s awards.

Tonight, he will join a special episode of BBC Newscast, during which he will have a one-to-one conversation with broadcaster Adam Fleming.

The programme was filmed at Kensington Palace, where the Duke even hosted a quiz focused on the upcoming climate change conference COP26.

This UN conference will take place in Glasgow between October 31 and November 12.