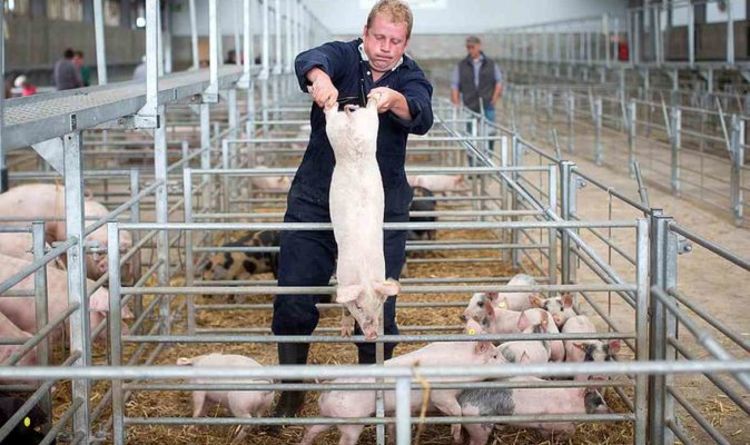 Under post-Brexit visa rules foreign vets and butchers are required to speak English. However, because of the chronic staff shortages in the UK’s farming sector, the Government is currently offering just 1,000 temporary visas to fill staff shortages. Now, the National Farmers’ Union (NFU) wants the Government to lower the required level of English requirements so more workers can come into Britain to tackle the staff shortage crisis on farms.

Minette Batters, President of the NFU, told The Mail on Sunday: “We want the required level of English to be lowered so there is a wider pool of workers who can come here and help to resolve this crisis.

“They could come here quickly if the language barrier was removed.

“We know that farmers are already killing pigs on farms.

Speaking to BBC Radio 4’s Today programme he said: “We are within a couple of weeks of having to consider a mass cull of animals in this country.

“This is happening on pig farms all over the country – they are backed up and running out of space to keep animals.”

NFU data suggests that approximately 500,000 of the four million people who work across the farming sector have left the industry during the pandemic.

The data also revealed that more than a third of vacancies in the horticulture sector remain unfilled.

The Office for National Statistics shows that 27 percent of food industry firms have lower than normal stock levels.

Accountancy firm Grant Thornton has revealed there are more than 500,000 vacancies across the food and drink businesses.

Amid the shortage, the Government has argued that food producers must pay British workers before relying on foreign labour.

However, sector producers say they will take too long to prevent a supply chain crisis.

A Government spokesman said: “We understand the challenges the pig industry has faced because of the pandemic, labour shortages, accessing Co2 supplies, and reduction in exports to the Chinese market.

“We are working closely with the sector during this time.”

Times Radio interviewed Prime Minister Boris Johnson this week about the possibility of a mass cull of UK pigs.

He responded by saying that pigs dying “is what happens in this country”.

Mr Johnson added: “Have you ever had a bacon sandwich?

“Those pigs, when you ate them, were not alive.”

British farmer, Katie Morgan responded to this on Sky News and said: “If he does not understand the difference between culling a pig in an abattoir and killing and incinerating a pig on-farm, which will not go into the food chain, I mean, we’ve got no hope have we.”

A spokesperson for the Department for Environment, Food and Rural Affairs (Defra) has said: “We understand the importance of seasonal labour and we are aware of the challenges that the pig industry has faced in recent months because of the Covid-19 pandemic and labour shortages, and Defra has been working closely with the pig and processing sectors during this time.”