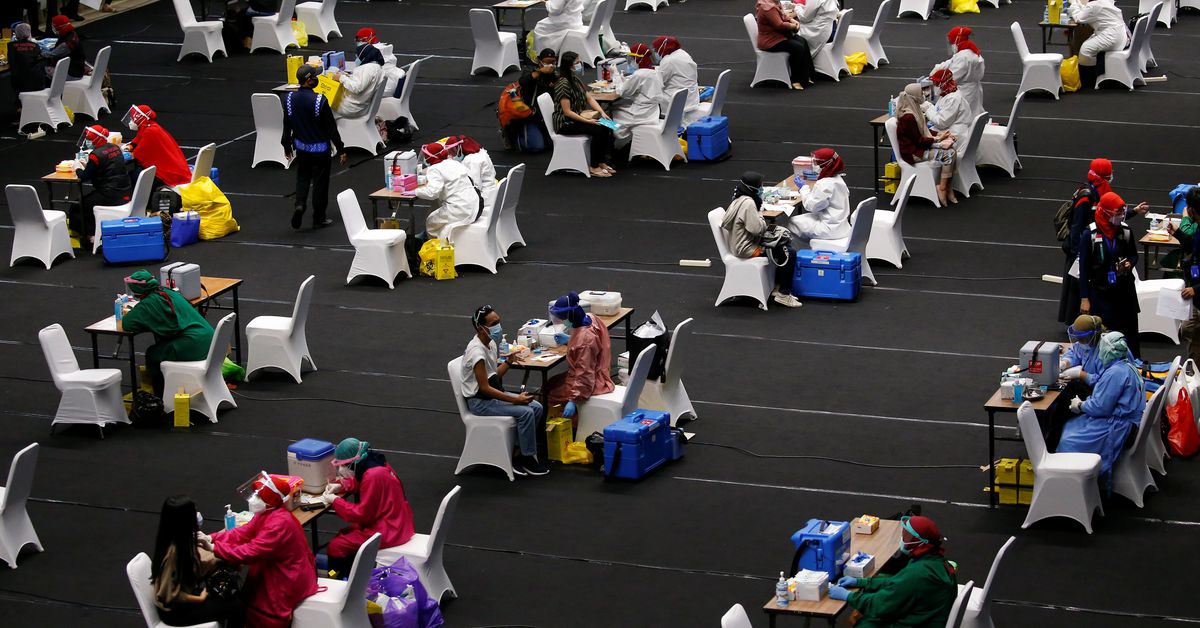 General view of a mass vaccination for medical workers at the Istora Senayan indoor stadium, amid the coronavirus disease (COVID-19), in Jakarta, Indonesia, February 4, 2021. REUTERS/Willy Kurniawan

JAKARTA, Oct 7 (Reuters) – Indonesia has approved a COVID-19 vaccine produced by a unit of China’s Chongqing Zhifei Biological Products (300122.SZ) for emergency use, its food and drug agency (BPOM) said on Thursday, the fourth Chinese vaccine cleared for use in the country.

BPOM chief Penny Lukito said the protein-recombinant vaccine, given three times in a three-month span, has an efficacy rate of about 81%, with 77.47% efficacy against the Delta variant, lower than other variants, she said.

Trials of the vaccine, Zifivax, were conducted in China, Uzbekistan, Pakistan, Ecuador and Indonesia, involving 28,000 people, with the efficacy based on any degree of severity.

Indonesia has also approved use of the Sinovac (SVA.O), Sinopharm, and CanSino (6185.HK), vaccines.

Once Asia’s COVID-19 epicentre, Indonesia has vaccinated a fifth of its population of about 270 million people.

It has recorded more than 4.2 million coronavirus cases and 142,000 deaths overall, but average daily infections have fallen dramatically since the peak of its crisis in July.

Mahendra Suhardono, head of Jakarta Biopharmaceutical Industry, which is partnering with Zhifei, said Zifivax shots could be produced in Indonesia this year.

Zhifei and its unit, Anhui Zhifei Longcom Biopharmaceutical, did not immediately respond to requests for comment.