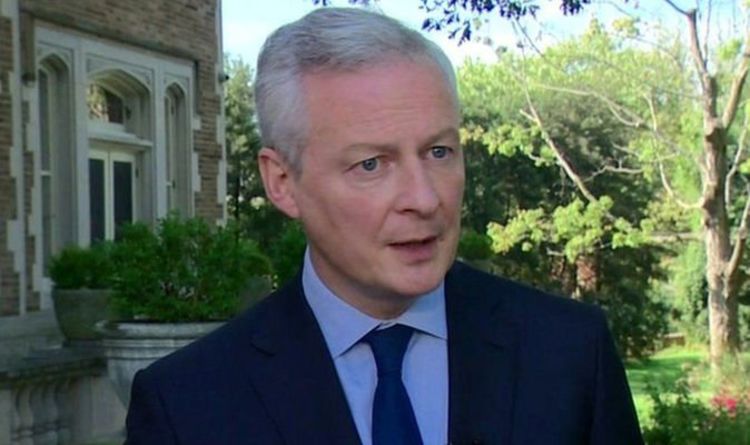 French Finance Minister Bruno Le Maire told the BBC that leaving the single market was the reason why Britain was most impacted by the supply chain crisis. He blamed Brexit for the ongoing chaos seen in the UK during a meeting with his British counterpart Chancellor Rishi Sunak. He said he told Mr Sunak that “for the UK it’s a little bit more difficult since they are no longer a member of the single market”.

The two met this week as global finance leaders gathered in Washington for the annual meetings of the International Monetary Fund (IMF).

Speaking to the BBC, Mr Le Maire said: “We are facing the same situation.

“But the fact that we are a member of a very important single market helps us facing these bottlenecks.

“I think it’s helping us because we can have access to other job markets.”

JUST IN: Photographer finds one of world’s most venomous spiders under bed

The close ally of President Emmanuel Macron continued: “When you are asking for some more people in restaurants, in hotels, for truck drivers, for instance, you have access to other labour markets.

“I want to emphasise that within the EU the fact that we have one single market helps us to face the difficulties in the labour market.

“Talking to Rishi Sunak on that very specific point, I just want to recall that for the UK it’s a little bit more difficult since they are no longer a member of the single market.”

Speaking at the same event as Mr Le Maire, Rishi Sunak said that shoppers can be reassured ministers are doing “absolutely everything we can” to fix supply chain issues.

Shipping containers carrying toys and electrical goods were diverted this week from the country’s biggest port because it was full.

The UK Government has announced a raft of short-term measures to deal with the crisis and battle acute staff shortages.

The rules on the number of deliveries overseas lorry drivers can make in the UK are also set to be relaxed in a bid to tackle supply chain problems.

Under the new plans, drivers will be able to make unlimited deliveries or collections within a 14-day period.