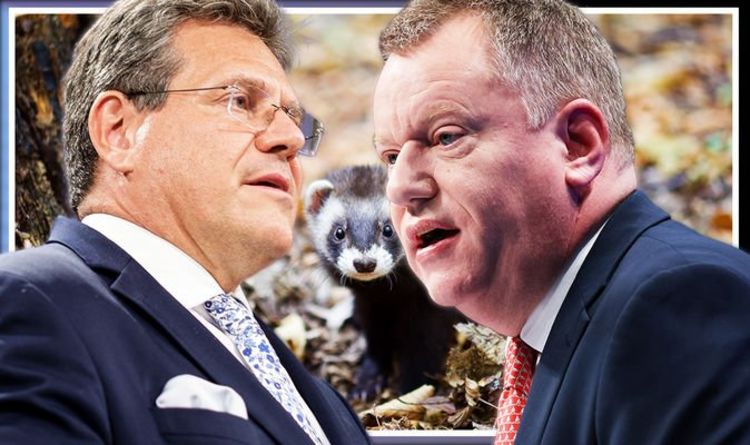 Maros Sefcovic, the European Commissioner with responsibility for discussions related to the Northern Ireland Protocol, unveiled a raft of key concessions on Wednesday, including dramatic reductions on the checks required on goods entering the region. However, Northern Ireland is still bound by EU rules on animals health, and speaking in Brussels, Mr Sefcovic gave no indication any compromise was in the pipeline.

As a result, British pet owners currently facing documentary requirements cost more than £110 to travel both to the UK, and to countries in the EU27.

Speaking to the Telegraph, Government sources described the situation as a “glaring omission” from the EU’s proposals.

Andrew Bridgen, Tory MP for North West Leicestershire, himself a former ferret owner, said: “I would call this a ferret blockade.

“It is about time the EU performed a reverse ferret.”

Fellow Tory and Clwyd West MP David Jones, deputy chairman of the European Research Group (ERG), added: “Northern Ireland is just as much a part of the UK as North Wales. It is an issue of sovereignty.”

Jeffrey Donaldson, the DUP leader, insisted any new agreement must include a “resolution on pet passports” in order to attract the support of unionists.

Rosemary Barton MLA, the Ulster Unionist Party’s Department of Agriculture, Environment and Rural Affairs (DEARA) spokeswoman said: “As we approach the summer months many people are turning their attention to a long-awaited break and many are choosing to stay within the UK because of the uncertainty that still prevails regarding travel to other countries.

“Once again concern has been raised about travelling with pets, particularly on the return journey from Great Britain to Northern Ireland, due to problems stemming from the Northern Ireland Protocol.

“While requirements that all pets are microchipped, are vaccinated against rabies and have had treatment against tapeworms, together with a valid European pet passport have been postponed until October 1, it is clear that a permanent solution is required.”

Ms Barton added: “Ways must be found to provide reassurance for pet owners and protect them from an extra expense of approximately £200 per pet.

“They cannot be dependent on continued last-minute derogations on the Protocol regulations.

“Many responsible owners today have their pets already microchipped, something that is encouraged particularly by local councils. “

The last case of rabies in the United Kingdom was in the 1920s, Ms Barton pointed out.

She said: “Is this medical intervention, which has implications for the over-vaccination of pets, necessary?

“Solutions must be found and people must have confidence that they can travel freely throughout the United Kingdom with their pets.”