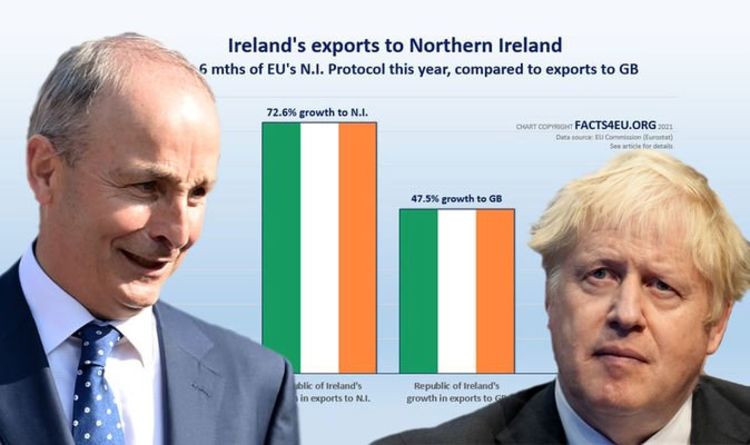 The report, prepared by the pro-Brexit think tank Facts4EU, is published at a time when the workings of the Protocol, the mechanism for preventing a hard border on the island of Ireland, are under the microscope after speeches by Brexit Minister Lord David Frost and European Commissioner Maros Sefcovic. The analysis, based on data from Eurostat, the bloc’s statistics wing, reveals a 72.6 percent increase in exports from Ireland to Northern Ireland since the start of the year.

Significantly, exports to the UK are up by less – 47.5 percent.

The figures also showed other countries were likewise able to increase the amount of goods they exported to Northern Ireland in the first six months of 2021.

Finland has seen a massive 426.2 percent spike, for example, while Belgian exports are up 139.5 percent, those from the Netherlands by 88.8 percent, Denmark by 78.6 percent and Germany by 70.2 percent.

The situation is compounded by the current difficulties in transporting goods between Great Britain and Northern Ireland – even though both are part of the United Kingdom.

Facts4EU spokesman David Evans said: “We must stress that no one is claiming that all of the 72.6 percent increase in Ireland’s exports to Northern Ireland is due to the protocol.

“As Covid restrictions have lifted, exports have risen in most countries.

JUST IN: ‘Attack on democracy itself’ Jo Cox husband speaks after Amess attack

“No judges from Northern Ireland (nor from GB) are on the panel.”

As such, Northern Irish companies, and even those in mainland UK servicing Northern Ireland – were therefore subject to EU state aid rules, Mr Evans pointed out.

He added: “It’s no longer has free access to products from the rest of the UK.

“And if NI residents visit relatives in the UK with their dog or cat, they can’t even bring their pet back home with them without incurring large fees and conditions.”

Referring the concessions outlined by Mr Sefcovic this week, Mr Evans added: “None of the above will change under the EU Commission’s latest proposals issued on Wednesday.

“This is not ‘getting Brexit done’. Not yet.

“Over to you, Lord Frost. A supposedly sovereign nation awaits.”

Speaking on Friday, Lord Frost said the European Union had made encouraging moves towards resolving the dispute over the Protocol – but insisted more was needed.

Prior to a meeting with Mr Sefcovic in Brussels, he explained: “I think the EU has definitely made an effort in pushing beyond where they typically go in these areas and we’re quite encouraged by that.

“But obviously there is still quite a big gap.

“And that’s what we’ve got to work through today and in the future.”