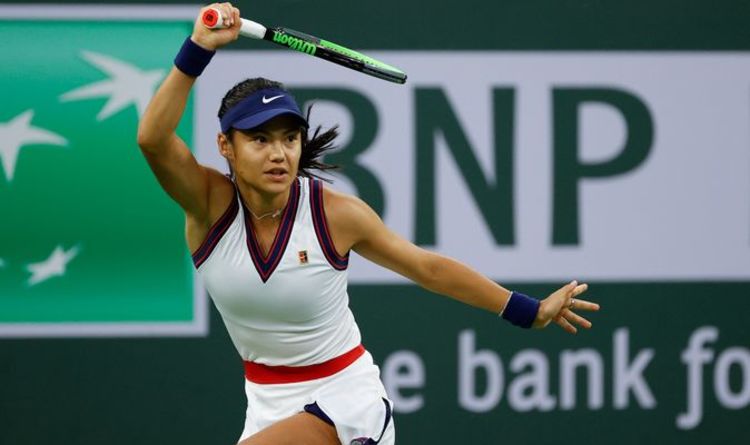 Emma Raducanu has become one of the biggest names in tennis following her historic US Open win. The Brit became the first-ever qualifier to win a Major last month, and the first woman to lift the title on just her second appearance at Grand Slam level. However, she suffered a disappointing return to the match court, losing to world No 100 Aliaksandra Sasnovich in Indian Wells while playing her first match since winning the US Open.

Raducanu has fast become one of the biggest names in tennis, and in a matter of weeks went from the barely-known qualifier to a top seed in Indian Wells, and the woman everyone wants to beat.

The Bromley local has been tipped for huge success following her seemingly-impossible victory at the US Open, with the likes of Tim Henman claiming she has “eclipsed” big names like Federer, Nadal and Djokovic.

However, an early loss for the new world No 21 in her first tournament since winning the US Open has reminded many that the young Brit is still a teenager who was ranked down at world No 338 a handful of months ago

As expectations continue to pile on Raducanu’s shoulders, fans are being warned that there have been several teenage tennis stars who never fulfilled their full potential after a breakout performance, and putting pressure on the Brit rather than allowing her to experience early losses could be dangerous to her future career.

Express Sport takes a look back at some former teenage champions who were tipped to dominate the game but were unable to sustain their success long-term.

The former world No 8 was tipped for big things when she made her WTA Tour debut aged just 14 in her home city of Moscow, and when she was 15-years-old she made the fourth round of the 1996 US Open, losing to eventual champion Steffi Graf.

She then made her top 20 debut in 1998 but was even more successful in doubles, winning multiple titles alongside Martina Hingis including the 1999 Australian Open, and by the end of 2000 she was a top ten singles and doubles player, having won six titles on the doubles circuit, but a year later found herself plagued by injuries.

After seeing some more success in 2002 – making a singles final at the China Open and winning a second Australian Open doubles title with Hingis – Kournikova once again struggled with injuries throughout 2003 retired in May of that year after suffering with a back injury that left her out for the rest of the season.

Hingis made a name for herself early on, becoming the youngest-ever Grand Slam champion at 15 when she won the Wimbledon women’s doubles in 1996, before winning the 1997 Australian Open singles title aged just 16, in a year where she also became the youngest world No 1 in history.

After winning three tournaments in 2001, she lost her top spot in the rankings for the final time in October and underwent right ankle surgery.

When she returned in 2002, she won the Australian Open women’s doubles title and was runner-up in the singles but underwent another surgery, this time on her left ankle, and in 2003 announced she was retiring at just 22-years-old.

The Swiss tennis legend has made several comebacks since then, winning more titles and reaching the world’s top 10 in singles in 2006, though she was suspended in 2007 after traces of a banned substance were found in a sample she provided, despite her appeal arguing the cause was contamination.

She came out of retirement once more for doubles in 2013 and saw great success until her final retirement in 2017, winning multiple Majors in women’s and mixed doubles, but never returned to the singles court or regained her dominant form from her teenage years.

During the 2017 French Open – the first Grand Slam Serena Williams withdrew from during her pregnancy – the field was wide open but 19-year-old Ostapenko was able to surprise everyone by coming through the draw while ranked down at world No 47.

Having turned 20 just before the conclusion of the event, she defeated tournament favourite Simona Halep from a set-and-a-break down in the final to win her maiden title at the French Open – a feat not achieved since Guga Kuerten did it back in 1997, on the day Ostapenko was born. She was also the first unseeded woman to win Roland Garros since 1933.

The Latvian initially had a successful few months after her surprise Major win, making the Wimbledon quarter-finals immediately after and reaching the world’s top 10 later in the season, before winning a second title at the Korea Open.

Ostapenko then made her top five debut after Indian Wells in 2018, and reached the Miami Open final just weeks later. After a Wimbledon semi-final appearance that summer, she spend the rest of the year struggling with injuries and failed to rack up more wins.

Ostapenko has gone on to have some recent success, returning to the world’s top 50 at the end of 2019 after runs to the final in Linz and the title in Luxembourg, and she won the WTA 500 event in Eastbourne earlier this year, but is yet to make a comeback into the top end of the rankings or taste more Major success.