The coronavirus disease 2019 (COVID-19) pandemic has heightened many social and economic disparities, in addition to the biological risk factors that have put several ethnicities at greater risk of hospitalization and death due to severe COVID-19. Vaccination appears to be a way out of the pandemic for these populations, with a highly protective effect against severe illness following infection with the severe acute respiratory syndrome coronavirus 2 (SARS-CoV-2).

However, vaccine hesitancy is high among several of these population groups, thus hindering efforts to protect them. Moreover, such pockets of susceptible people pose a risk of viral transmission to the entire community.

A new study published on the preprint server medRxiv* discusses this problem and offers insights into how these groups can be effectively persuaded to exploit the advantages of currently available COVID-19 vaccines. 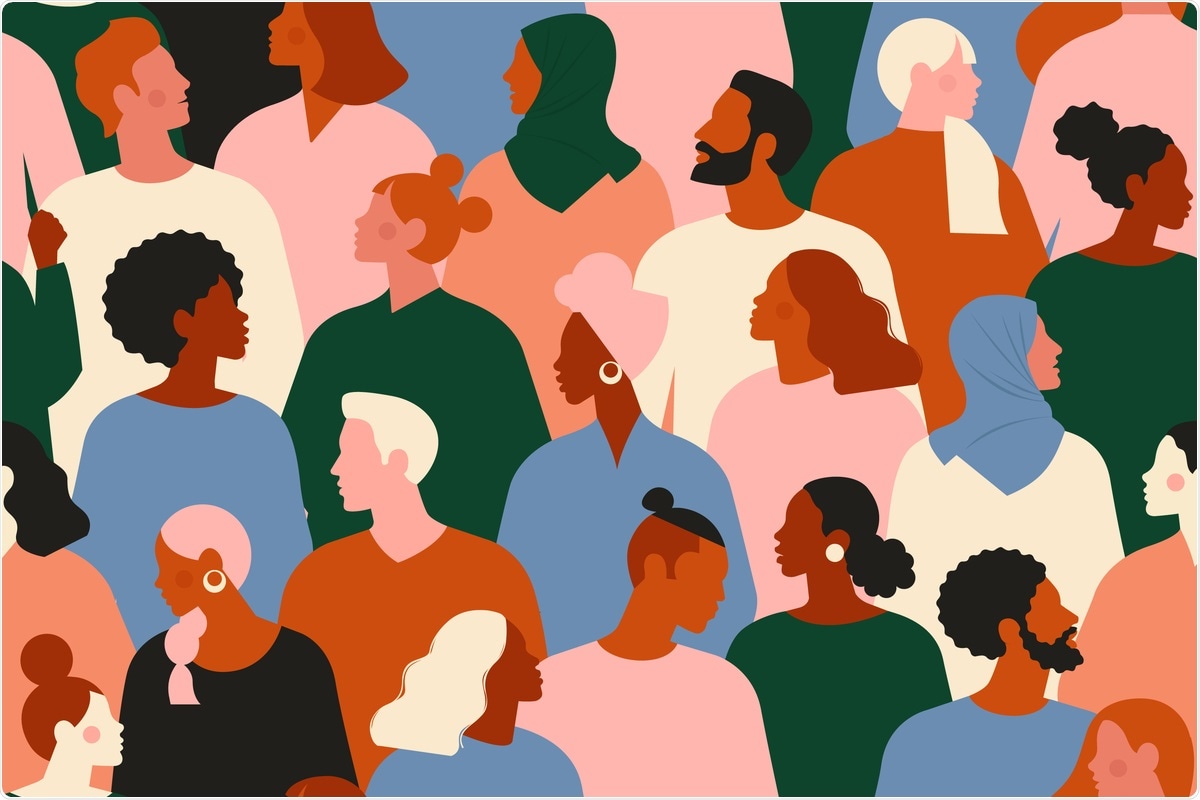 In April 2020, the United States Centers for Disease Control and Prevention (CDC) showed that Black Americans made up less than a fifth of the population but a third of COVID-19 hospitalizations across 14 U.S. states. By July 2021, Black Americans in the U.S. were almost three times more likely to have severe COVID-19 and twice as likely to die of this disease as compared to White non-Hispanic populations.

This is in part attributable to the higher prevalence of illnesses such as diabetes, obesity, heart disease, and high blood pressure among Blacks and Hispanics in the U.S. A second factor is the increased chance that Black Americans live in overcrowded housing, in multigenerational families, with lower household incomes.

Taken together, these factors increase the risk of viral spread and reduce access to SARS-CoV-2 testing and/or medical care. In fact, the U.S. Department of Labor reported that just before the pandemic, less than a fifth of Black employees had jobs that would enable them to work from home, which is comparable to nearly a third of White employees. This would mean that Black workers were more likely to be exposed to the virus at work.

These factors create a vicious confluence that results in the excess burden of COVID-19-related death and disability in these ethnic minority groups. Vaccine uptake has been low in these groups during the initial phase of the vaccine rollout; however, the changing profile of vaccine distribution and the impact of information campaigns has led to a significant change in this perception.

It is important to understand what causes people to be unwilling to take these vaccines, s this will form the foundation of effective interventions. The first three vaccines to gain emergence use authorization from the U.S. Food and Drug Administration (FDA) were the two nucleic acid vaccines from Pfizer/BioNTech and Moderna, as well as the virus vector vaccine from Johnson & Johnson.

Reduced vaccine uptake among Black communities was attributed, at first, to their hesitancy, as well as their suspicion of medical care and research based on historical wrongs. However, a closer look shows that the vaccine rollout itself was poorly planned, leading to skewed availability of the vaccine to people of color.

This was due to both age restrictions and differences in accessibility of vaccination sites. In the first case, the initial prioritization of vaccines restricted distribution to those aged 75 and above. Notably, the mean life expectancy among Black Americans was only 72 years in 2020, as compared to 78 years in the White population.

Again, while less than one in ten Black Americans in the U.S. were 65 years or older in 2018, and even fewer Hispanics, the corresponding figure among Whites was 20%. Obviously, this meant that older Whites were gaining far more access to the vaccine in the early phase than minority ethnic groups.

As a result, statistics show that in 40 U.S. states, Whites had received at least one dose of the vaccine at 1.5 times higher numbers than Blacks and Hispanics, at 43% and about 30%, respectively. By the end of July 2021, the CDC reported that Whites were four times more likely than Hispanics and six times more likely than Blacks to have received at least one dose.

The current study describes vaccine acceptance in a group of racially and geographically diverse individuals. The data comes from the Minority and Rural Coronavirus Insights Study (MRCIS), which was conducted by the National Minority Quality Forum (NMQF).

The researchers chose to sample participants at Federally Qualified Health Centers (FQHCs), as they see more than one in four poor Americans and also have large proportions of patients from minority groups. FQHCs are also largely located in underserved areas and thus offer a fertile field for research.

FQHCs were located in rural to urban areas throughout the West Coast, Midwest, Southern, and Southeastern parts of the U.S. The served population groups included Blacks, Hispanics, American Indians, and Whites.

There were differences in the level of financial security, mean age, ethnic composition, and other sociodemographic factors. Only about 7-18% of the participants had a COVID-19 diagnosis currently or in the past; however, up to a quarter had an infected household member, while up to 43% had a friend or neighbor with COVID-19.

High rates of mask use and social distancing were reported. Comparably, 60% or more of people in 4/5 sites said they would get a flu vaccination in the current year. In the last site, only 43% of people intended to get a flu shot.

The overall COVID-19 vaccine acceptance rate was 56%, with one in four indicating that they were undecided. The highest acceptance was reported to be 72%, with the lowest at 41%. Overall, over 70% of those who were willing to get the COVID-19 vaccine would also get a flu shot.

Women were more hesitant to get the COVID-19 vaccine than men, with the largest difference being at a Louisiana site. Here, 54% of men and 33% of women were willing, with the overall figures being 40% each for and undecided about the vaccine.

The results showed that only 45% of Blacks were willing to be vaccinated against COVID-19, which was comparable to 56% and 60% of Whites and Hispanics, respectively. In the California site (region 9), the corresponding figures were 55%, 83%, and 75%, respectively.

Region-wise, region 9 had the highest vaccine acceptance, and region 6 the lowest.

The findings of the current study suggest that Blacks are more likely to show hesitancy, while Hispanics are equally or more willing than Whites to get a COVID-19 vaccine dose when eligible. The barriers for Hispanics are also related to immigration status. There is a high proportion of people who say they are undecided, which shows that they need to be focused on in public education campaigns to convey the advantages of vaccination in the current pandemic.

The high interest in region 9 as compared to the low rate of acceptance in region 6 is explained by the fact that the latter was polled before the first vaccine was authorized for emergency use. The former was surveyed at the peak of the California outbreak in January/February 2020, with high rates of hospitalization and mortality, and increasing panic.

Even here, region 9 showed a large difference in willingness by racial composition. Interestingly, this was the only site where homeless people were actively sought out, and 57% of Blacks at this site were homeless. This could show the impact of housing insecurity on vaccine hesitancy.

Again, some of the homeless were enrolled through a shelter that was associated closely with a community health organization. The few Blacks at that shelter appeared to have been favorably impressed with the vaccine messaging there, showing a higher-than-average interest in taking the vaccine.

Grassroots outreach with community partners who have gained the trust of that locality appears to be an effective way to convince individuals to take the COVID-19 vaccine.

Difficulties with housing, food, employment, and medical care faced by the poor and underprivileged may hinder their interest in the vaccine. Perhaps incentives to take the vaccine should be shaped by empowering and encouraging those who are already working in these areas.

Such people would be able to pass the right information about the vaccine and influence the community they work among, thus boosting vaccine uptake. Coupling influenza and COVID-19 campaigns could also work, as shown by the high concordance in willingness to take these shots in many regions.

Further follow-up will elucidate whether those who responded with an “Undecided” response remain unvaccinated, especially those who were enrolled before vaccines became available. Those who expressed hesitancy will also be asked the reasons to improve the understanding of the underlying issues.

The researchers remind the readers that prejudices about the reasons for low vaccine uptake among racial and ethnic minorities must be dismissed.

These communities must be better served with infrastructure so as to deploy essential public health interventions while examining the differences in vaccine responses and needs between populations.

medRxiv publishes preliminary scientific reports that are not peer-reviewed and, therefore, should not be regarded as conclusive, guide clinical practice/health-related behavior, or treated as established information.