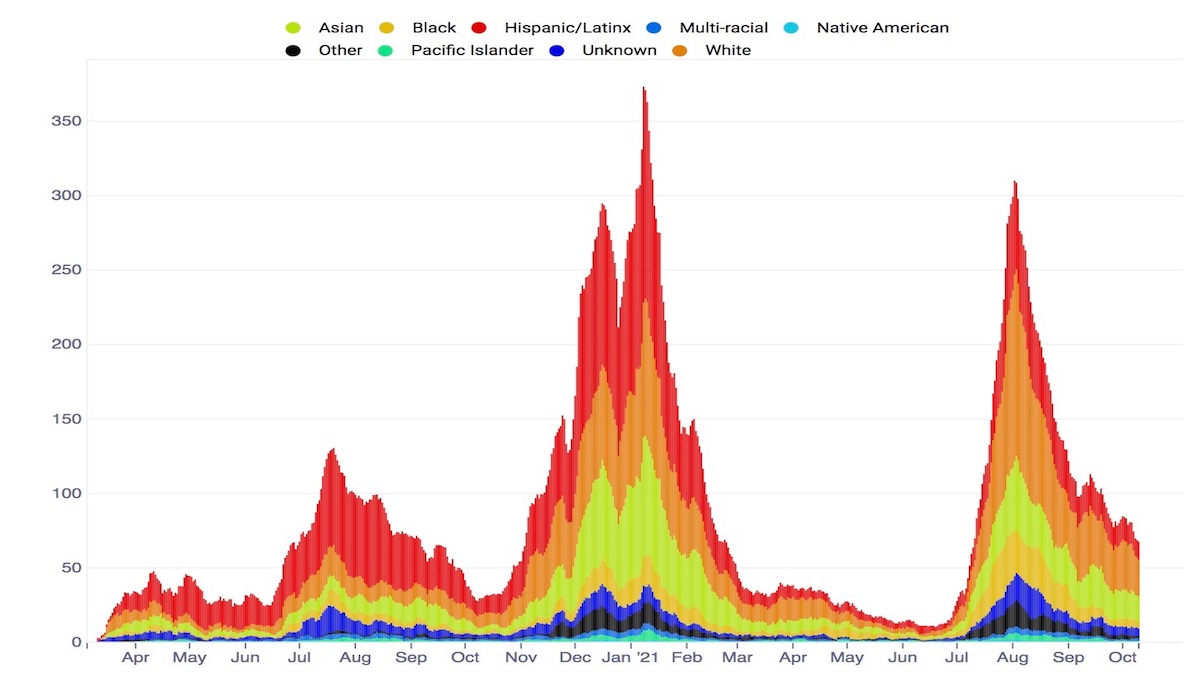 The numbers declined over the week but not by much.

Although the Moderna vaccine has been found to generate long-lasting immune memory, the FDA advisory committee endorsed a reduced Moderna booster, but pointedly did not recommend boosters for all. No matter; the practical result is that pretty much anyone who wants a booster will be able to get one. As there was no data to support the need for a Moderna booster, the commitree relied on old Pfizer data from Israel. One committee member, expressed concerns but thought not granting a similar approval would leave people in the U.S. “completely confused.” Good point doc.

Perhaps with the booster decision, and an earlier decision granting approval without data for an alzheimer’s drug, then FDA has decided to play it scientifically wise with the new Merck covid drug, which alters the virus’ DNA. “Risks for the host may not be zero,” said researchers in what might be the understatement of the year.

When lockdowns were first mandated last spring, they were promoted as a way to “flatten the curve” and give the health care system some time to provide adequate control measures. Beyond masking and hand washing, controls either didn’t happen, or happened piecemeal as lockdowns became the primary mitigation method without adequate social and economic backup. There were economic costs, but also mental health costs, especially among young people who were kept out of school. Closing playgrounds probably didn’t help either.

Here’s an interview with Dr. Susan Ehrlich, CEO at Zuckerberg San Francisco General Hospital, which was called on to provide care for the most at risk and underserved populations in the City. She stresses the importance of community involvement.

Speaking of inequities in health care, the covid crisis has prompted the National Institues to announce $100 million for new research into the subject. That’s good news. The bad news is the announcement unleashed “a gold rush mentality where researchers with little or no background or training in health equity research, often white and already well-funded, are rushing in to scoop up grants and publish papers.”

Inequality does not seem to be the main concern of the Californial health care industry, which is struggling to maintain the current high costs of health care.

Looking for a flu shot? Unidos for Salud is offering free flu shots on Saturdays until the end of the month.

The U.S. Centers for Disease Control data used for the chart lags behind the data supplied from the San Francisco Department of Public Health. As of Oct. 14, DPH reports more than 80 percent of all San Francisco residents have received one dose, and 75 percent are completely vaccinated. For those over 12, 88 percent have received one dose and 83 percent are fully vaccinated. New vaccinations, though low, keep on truckin’. On Oct. 12, the seven-day rolling average of shots per day was 203. For information on where to get vaccinated in and around the Mission, visit our Vaccination Page.

Covid-related deaths in San Francisco are always difficult to figure. The death DPH recently added in September was apparently the first October death. The Delta total (August,September and October) remains at 69  and the cumulative covid-related death toll to 645. According to DPH, over half the deaths were among persons over the age of 80 with 87 percent over the age of 60. Less than 3 percent had no known underlying condition. For the time being, DPH has stopped reporting the vaccination status of covid-related deaths.

Covid R Estimation kept its most recent San Francisco R Number at 1.01 and its current estimate for the California R number at .93. According to this model, SF is one of only 3 counties in the state at 1 or higher. In contrast, the ensemble raised its average  San Francisco  R Number to .81 while putting its California average at .82. No model in the ensemble shows the SF rate of transmission  currently above 1.