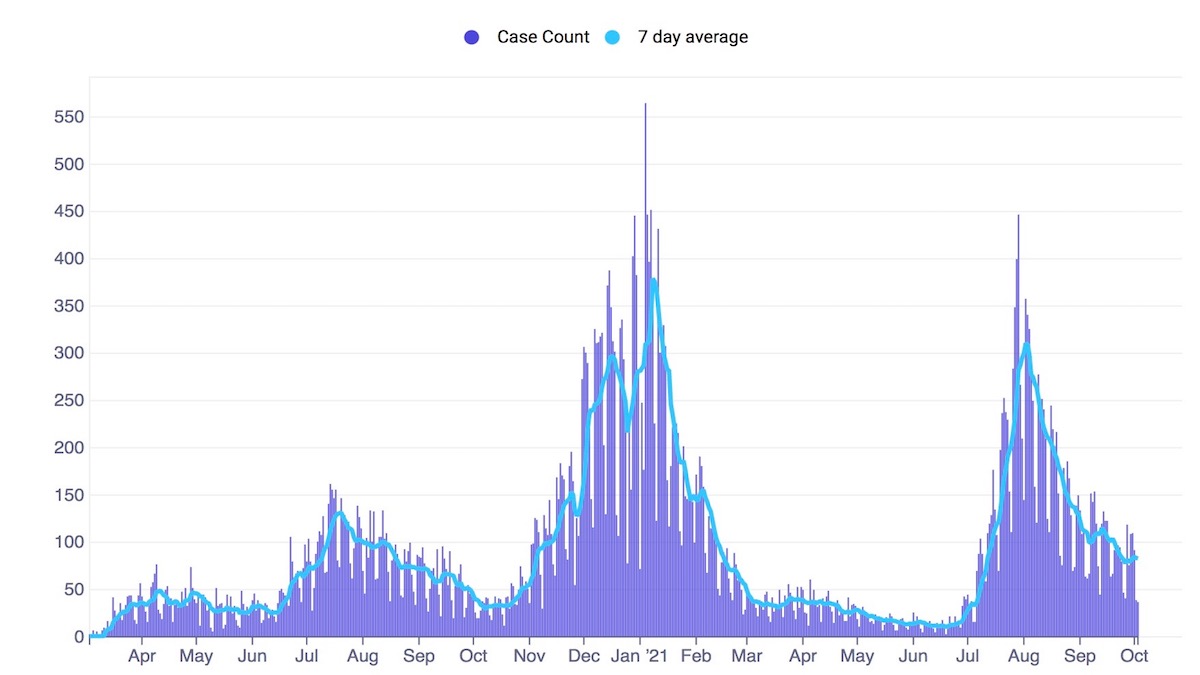 Infection numbers, hospitalizations and positivity rates have been slightly rising over the past week, while R Number models show today a slight decrease in the rate of transmission.

Yesterday’s UCSF Grand Rounds featured a discussion on the evolution of the virus and what we can expect from rapid tests. The Biden administration yesterday announced new funding for more at-home rapid tests. I wish they had addressed the virus’ unusual pattern in San Francisco that has persisted for the last three weeks.

Despite the numbers, the big news today is that San Francisco will be loosening its indoor masking requirements next week. Though it may be difficult to understand which places will not require a mask, this is how the Mayor explains it. For the foreseeable future masks will still be required in restarurants and bars (where I have observed very few people follow the rules to mask up between bites and sips).

It may also be difficult to understand why the City is changing its policy. The criteria for loosening the mask requirements are: 1) moderate transmission as determined by the CDC, 2) 80 percent of the total population fully vaccinated, and 3) hospitalizations low and stable. According to the latest data, SF misses on the first two, and the third is a judgement call.

Others offer different ideas (metrics) for emerging from the public health emergency.

Is the immunity offered by natural infection the same as the immunity you get from The Vaccine? Although infection is thought to confer a certain amount of immunity, no one is quite sure how much immunity or how long it will last. Since no company profits off natural immunity, few studies have been done on the subject, but here’s one published recently, concluding “[t]he protective effect of prior SARS-CoV-2 infection on re-infection is high and similar to the protective effect of vaccination” but that more research on duration of protection and protection against variants is needed.

A new study out of Italy shows seven months after the second dose, there is no reduction in the efficacy of COVID-19 mRNA vaccines in the general population, while a slight decline is seen for some specific groups. However, recent data suggests an mRna booster for those who received the Johnson & Johnson vaccine. According to UCSF doc Monica Gandhi, UCSF is already providing a booster “to anyone who had gotten Johnson & Johnson vaccines”.

Good news on the Dubs front: Andrew Wiggins got vaccinated. Kareem Abdul Jabbar has expanded his criticism of NBA stars who continue to refuse vaccination calling out those like LeBron James and Draymond Green who defend them.

Here’s some more reasons why virology labs that manipulate viruses should stop. Now.

And for those who think genetics, rather than racial and income inequality, cause health inequities, it’s time to think again.

The U.S. Centers for Disease Control data used for the chart lags behind the data supplied from the San Francisco Department of Public Health. As of Oct. 7, DPH reports more than 80 percent of all San Francisco residents have received one dose, and 75 percent are completely vaccinated. New vaccinations, though low, keep on truckin’. On Oct. 7, the seven-day rolling average of shots per day was 208. For information on where to get vaccinated in and around the Mission, visit our Vaccination Page.

Positivity rates are based on testing, but not all tests (like at-home rapid tests) are counted. While the number of tests counted by the City is down from last winter, far more tests have been collected than last spring and summer.