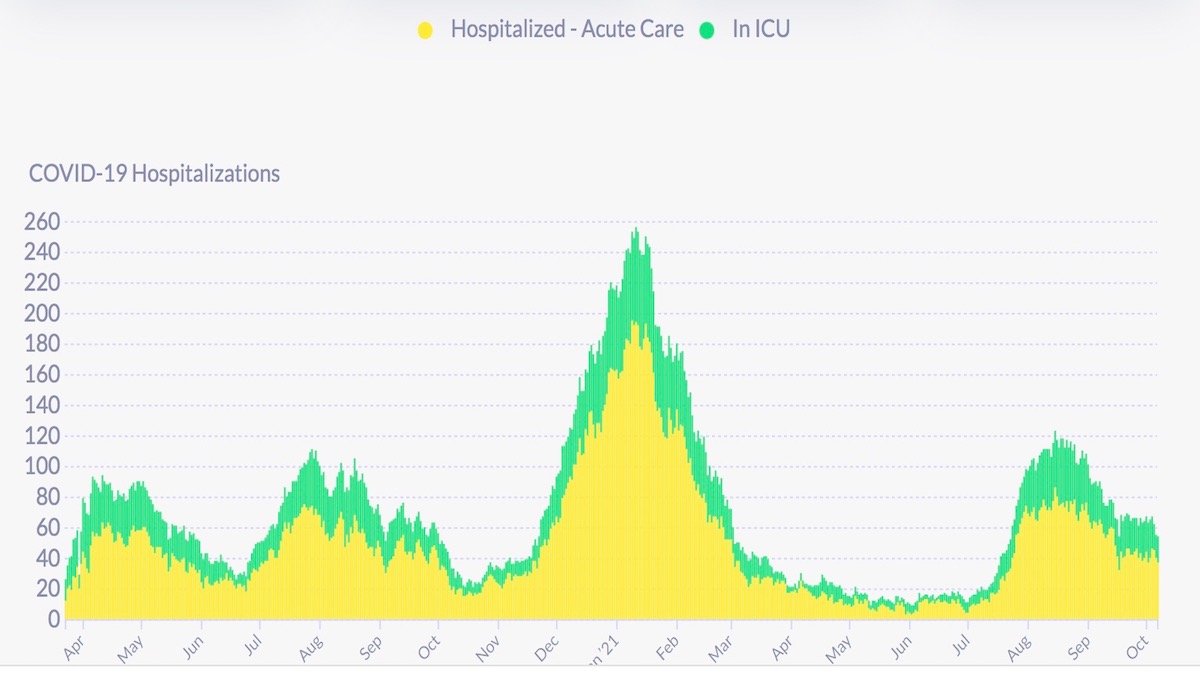 Though case numbers may be rising, hospitalizations took a significant dip over the weekend for the first time in close to a month. Positivity rates remain low, while R Number models suggest a local rate of transmission below 1.

In philanthropy circles it’s called a “public-private partnership”, when the public provides the research and development funds from which private companies, Merck for example, profit. The FDA will soon consider Merck’s Covid-19 pill for emergency use authorization. Although Merck’s trials show efficacy, there is some conflicting independent data, but does anyone seriously doubt the pill will get the green light?

Another example is Moderna, which received public financing, to the tune of $1.3 billion for clinical trials and a pre-order (guaranteed market) of $1.5 billion. Moderna CEO Stéphane Bancel, a recently minted billionaire, says “it’s sad” poor countries haven’t received the vaccine because it hasn’t gotten government financing for increased production. The company now says it will begin producing its vaccine in Africa some time in the future.

The Chronicle has been all over the City’s changing indoor masking policy, with articles saying very little (to be fair, there’s not a whole lot to say). Lead covid reporter Erin Allday states that everything now hinges on kids getting The Vaccine. Long story short: expect that indoor masking will most likely be a thing at least until 2022, with some modifications.

Rising case reports out of highly vaccinated Singapore have provoked more concern over The Vaccine’s efficacy. But a deeper dive into the data shows 98 percent of the cases are asymptomatic or mild.

Which brings us back to an increasingly popular word in covid circles: endemic. Former FDA commissioner (turned venture capitalist and TV talking head) Scott Gottlieb sees the “pandemic phase” fading, in part due to the Merck pill and vaccinated children as “two very important psychological events.” Note: Gottlieb is on the board of Pfizer, whose child vaccine is up for FDA approval at the end of the month.

Last week, I linked to a piece that argued jails and prisons have been key drivers of the pandemic in the U.S. How does that happen? Here’s a first-person account of the San Quentin outbreak last spring.

In the discussion of boosters, there’s been a lot of talk of “immunocompromised” individuals being at risk. But what does immunocompromised mean, and how can you tell if you’re at risk? Here’s a piece which may be of some help.

And finally, some good news. Congrats to San Francisco’s Department of Public Health, which announced that 70 percent of the City’s Black population has received at lease one dose of The Vaccine, well above state (57 percent) and national (37 percent) averages.

The U.S. Centers for Disease Control data used for the chart lags behind the data supplied from the San Francisco Department of Public Health. As of Oct. 10, DPH reports more than 80 percent of all San Francisco residents have received one dose, and 75 percent are completely vaccinated. New vaccinations, though low, keep on truckin’. On Oct. 10, the seven-day rolling average of shots per day was 253. For information on where to get vaccinated in and around the Mission, visit our Vaccination Page.

On Oct. 7, DPH reports there were 54 covid hospitalizations, or about 6.2 per 100,000 (based on an 874,000 population).  DPH says it has “temporarily pausing our reporting of breakthrough hospitalizations and deaths to conduct a thorough review of data quality and completeness.”   The CDC, in “observance of Columbus Day,” will not be providing hospitalization updates until tomorrow.  As of Oct. 4, the CDC says that, of more than 185 million vaccinated U.S. residents, 30,177 patients with a covid vaccine breakthrough infection were hospitalized or died (though 15 percent of deaths  and  hospitalizations did not have symptoms of covid, or their hospitalization or death was not covid-related).