There are Cobb County parents and public health officials are concerned that his message is neglegent. Cobb School Board Vice Chair David Banks tells people not to get a COVID-19 vaccine.

COBB COUNTY, Ga. – An elected school board official in Cobb County is accused of sharing information that tells the public the COVID-19 vaccine is harmful.

In a recent email to Cobb County parents, Cobb County School Board Vice Chairman David Banks appears to be sharing debunked information from someone else.

In part, it reads, “Do not take the shots, if you have not already done so.”

It goes on to say, “The government is intentionally killing its citizens.” 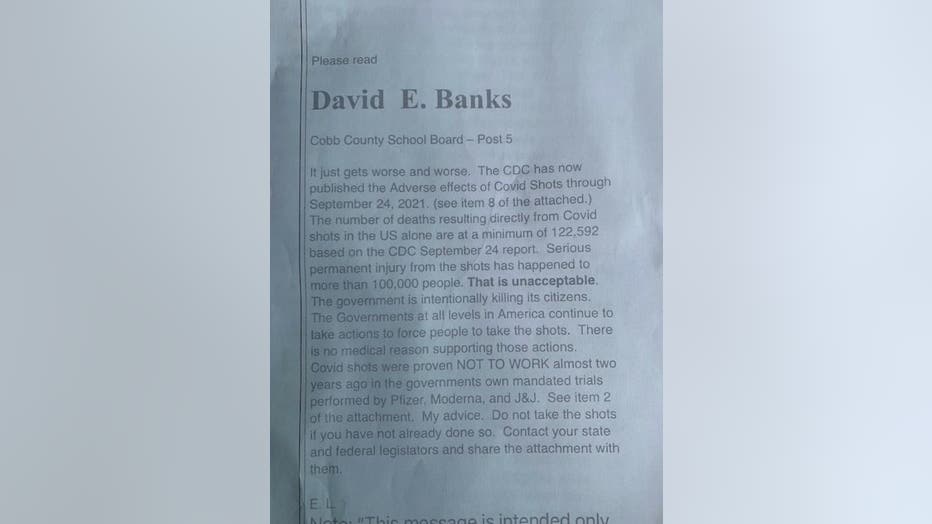 The information is contrary to the advice of public health officials.

Dr. Janet Memark, Director of Cobb and Douglas Public Health, made a recent comment when a Georgia Representative came to her for a flu shot.

“We actually have seen some high-level people — elected officials — that are putting out some bad information that is really very risky to people’s lives,” she said.

A school district spokesperson sent a statement in response to the email:

“Like any Cobb citizen, the comments of any individual board member should be understood as official board policy or positions of the board as a whole.”

FOX 5 Atlanta has reached out to Banks for a comment, but he has not responded.

There is outrage among some Cobb County parents.

“I will say there is a large group of parents and concerned citizens who think he needs to resign,” Cobb School District parent Charis Granger-Mbugua said.

This is not the first time Banks has come under fire for an email. In Aug. 2020, Banks used the term “China virus” when talking about COVID-19. It’s a term deemed offensive by Asian Americans.