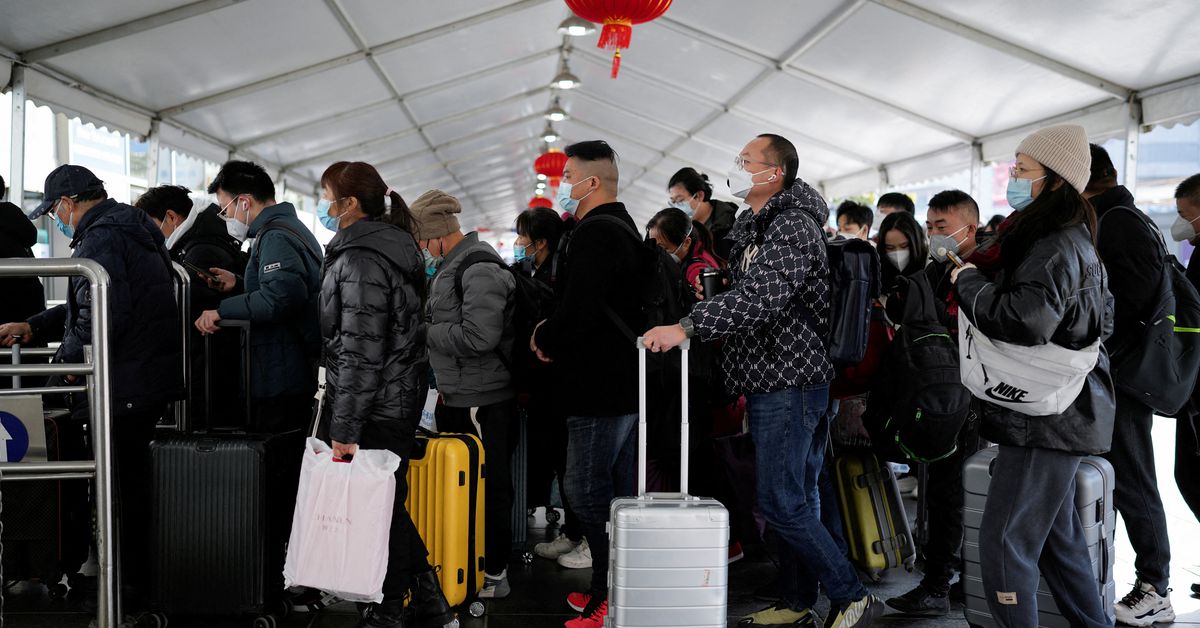 The world’s second-largest economy slowed sharply in the fourth quarter, data showed on Tuesday, dragging 2022 growth down to one its worst performances in nearly half a century after three years of COVID restrictions and lockdowns.

With mass travel for the Lunar New Year possible for the first time in nearly three years after the relaxing of some of the world’s tightest COVID curbs, the economy stands to gain from hundreds of thousands of people a day spending more as they return to China’s hinterland.

While many analysts say a return to economic normality will be gradual as the impact of COVID weakens, some see the Lunar New Year as a welcome early consumption boost.

“Peak infections passed in major cities in January, and with the Spring Festival coming, tourism is back, and the signs of a recovery in consumption are obvious,” said Nie Wen, a Shanghai based economist at the investment firm Hwabao Trust.

But even as workers move out, health experts fear a broadening and deepening of its COVID outbreak, leaving the elderly in rural villages particularly vulnerable.

Despite Chinese authorities confirming a huge increase in deaths on Saturday – announcing that nearly 60,000 people with COVID had died in hospitals between Dec. 8 and Jan. 12 – World Health Organization (WHO) officials are seeking a more sweeping accounting of death rates.

The WHO earlier welcomed Saturday’s announcement after last week warning that China was heavily under-reporting deaths from the virus.

Specifically, the U.N. agency wants information on so-called excess mortality – the number of all deaths beyond the norm during a crisis, the WHO said in a statement to Reuters.

“This is especially important during periods of surges when the health system is severely constrained,” the statement said on Monday.

The WHO added that it would continue working with China to provide advice and support, but had not yet fixed another formal meeting with Chinese officials after WHO Director General Tedros Adhanom Ghebreyesus spoke with Ma Xiaowei, director of China’s National Health Commission, at the weekend.

The Ministry of Transport has estimated the rush will see a total of 2.1 billion passenger trips nationwide between Jan. 7 and Feb. 15 as many Chinese city dwellers make the most of their first chance for Lunar New Year trips to see extended family in home regions since the pandemic began.

State media reported that some 390,000 passengers were expected to travel from Shanghai train stations on Tuesday alone for what is known as the Spring Festival holiday – seen as the world’s largest annual mass migration before COVID.

As travellers moved through stations in Shanghai, China’s largest city, some expressed optimism despite the risks.

“I am not worried about the virus. Because we are young, our immunity is okay,” 37-year-old migrant worker Zhou Ning told Reuters outside the Shanghai Railway Station as he prepared to head back to his home area in Bazhong in the northeastern province of Sichuan.

“Back in my hometown, there are many people who have tested positive, but I am not worried about it.”

On a train leaving Shanghai, fellow migrant worker Feng Hongwei, aged 21, said he was “so happy, so excited” as he began a trek home to Puyang, Henan. “I haven’t seen my parents in two years”.

The holiday season has also sparked a revival in domestic air travel with more than 70,000 flights across China between Jan. 7-13, according to industry data reported by Shanghai Securities News on Monday. That’s equivalent to more than 80% of the levels seen before the pandemic.

International air links are also recovering. Emirates Airlines on Monday became the latest carrier to announce it would resume services from its Dubai hub to Shanghai this week, and would operate daily flights to Shanghai and Beijing from March.