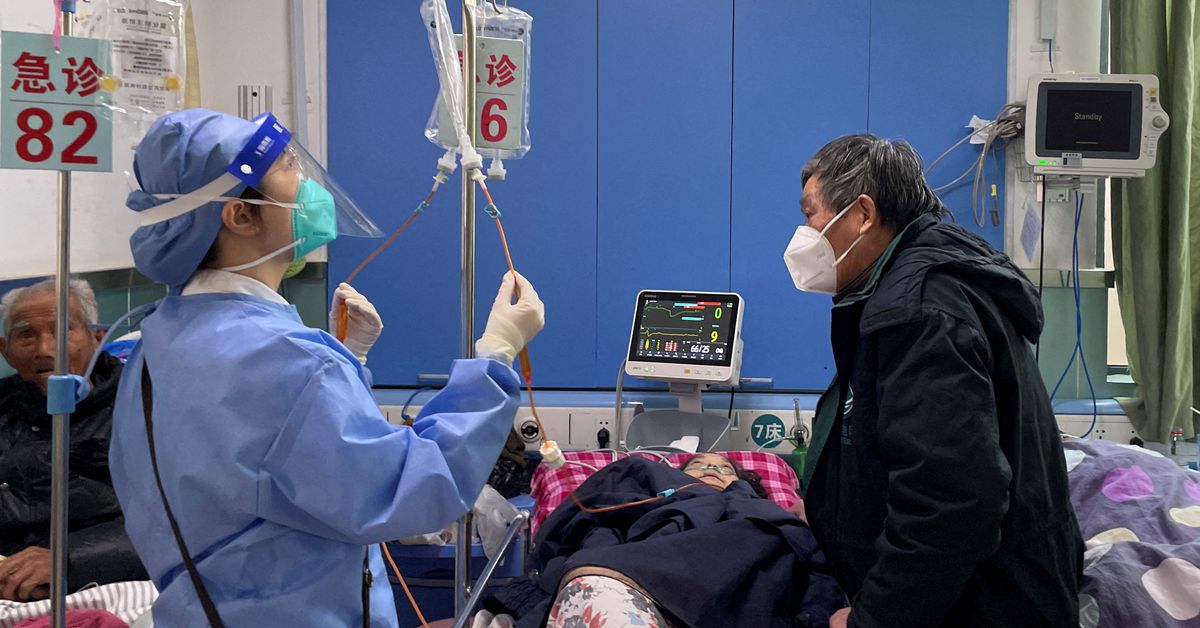 BEIJING, Jan 19 (Reuters) – Chinese drugmakers rushed to make anti-fever medicines and other treatments for COVID-19 on Thursday, after President Xi Jinping said he was worried about an influx of holiday travellers to rural areas ill-equipped to deal with sudden outbreaks.

Xi’s comments come just over a month after his government abruptly axed his strict “zero-COVID” controls that had largely shielded China’s 1.4 billion people from the disease for three years but sparked widespread protests in late November.

As travel ramps up during the busy Lunar New Year holiday season, as many as 36,000 people could die each day from the disease, according to the latest forecasts from UK-based health data firm Airfinity.

China said last Saturday that nearly 60,000 people with COVID had died in hospitals between Dec. 8 and Jan. 12 – a roughly ten-fold increase from previous disclosures.

However, that number excludes those who die at home, and some doctors in China have said they are discouraged from putting COVID on death certificates. Health experts say China’s official figures likely do not reflect the true toll of the virus.

“Based on the reports of hospitals being overwhelmed and long queues outside funeral homes, we might estimate that a larger number of COVID deaths have occurred so far, maybe more than 600,000 rather than just 60,000,” said Ben Cowling, an epidemiologist at Hong Kong University.

China’s chaotic exit from a regime of mass lockdowns, travel restrictions and frequent COVID testing, has also prompted a run on drugs as people fend for themselves against the disease.

To meet soaring demand, drugmakers in China are ramping up operations to triple their capacity to make key fever and cough medicines, the state-run China Daily reported on Thursday.

China has relied on domestic vaccines to combat the pandemic, eschewing foreign-made ones which some studies have suggested are more effective, while other foreign treatments for COVID-19 have been hard to come by in China.

Pfizer’s (PFE.N) COVID-19 anti-viral drug Paxlovid is available in China but has been very difficult to obtain through official channels, according to media reports and personal accounts. Merck & Co’s (MRK.N) antiviral treatment molnupiravir has also been approved for use but is not yet widely available.

At a meeting this week, China’s National Medical Products Administration pledged to stabilise the prices of COVID-related drugs and crack down on counterfeit sales.

Those particularly vulnerable to the virus are the elderly, many of whom are not fully vaccinated and now face exposure as millions of urban workers travel to home towns to reunite with families for Lunar New Year holidays that officially start on Jan. 21.

Before COVID first emerged in the central Chinese city of Wuhan in late 2019, the holiday was known as the greatest annual migration of people anywhere on the planet.

“China’s COVID prevention and control is still in a time of stress, but the light is ahead, persistence is victory,” Xi said on Wednesday in a holiday greetings message carried by state broadcaster CCTV.

“I am most worried about the rural areas and farmers. Medical facilities are relatively weak in rural areas, thus prevention is difficult and the task is arduous,” Xi said, adding that the elderly were a top priority.

Several Chinese cities are set to celebrate the New Year with massive displays of fireworks after local governments reversed bans on their sale in recent years.

Hangzhou, Kunming, Zhengzhou, and Changsha – which all have populations above 10 million – will allow the sale of fireworks, according to the Yicai business magazine.

Airfinity on Wednesday estimated 62 million people could be infected with the virus between Jan. 13-27 and that COVID-related deaths could peak at 36,000 a day on Jan. 26, up sharply from previous forecasts.

“Our forecast estimates a significant burden on China’s healthcare system for the next fortnight and it is likely that many treatable patients could die due to overcrowded hospitals and lack of care,” Airfinity’s analytics director Matt Linley said.

Looking beyond the death toll, there is optimism that China’s reopening will reinvigorate a $17 trillion economy suffering one of its lowest growth rates in nearly half a century.

China could see a sharp recovery in growth from the second quarter onwards, IMF Deputy Managing Director Gita Gopinath told Reuters in an interview at the World Economic Forum in Davos on Wednesday.

Those hopes have nudged China’s main stock markets and yuan currency to multi-month highs in recent sessions, although trading was light on Thursday as investors wound down for the holidays.

Chinese-controlled Hong Kong, which is trying to revive its finance and trade-reliant economy, said on Thursday it won’t require people with COVID-19 to quarantine from Jan. 30, removing one of its last major virus restrictions.