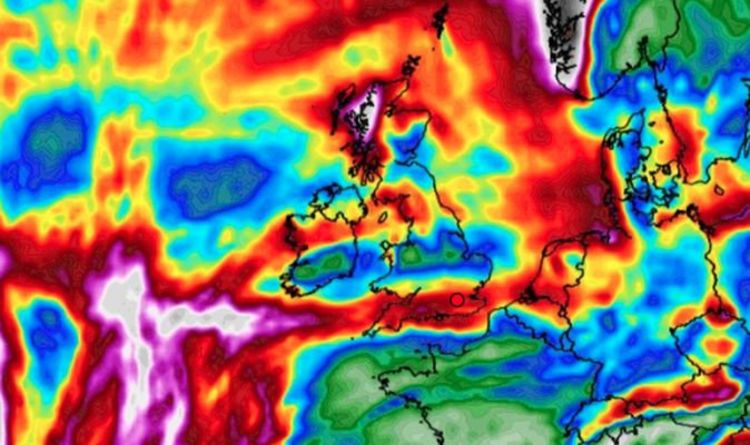 The UK is braced for “damaging winds gusts” as a stormy weather pattern builds across Europe towards the end of the month and into November, AccuWeather said. Western parts of Scotland, northwestern England, Wales and Northern Ireland are likely to see the worst of the conditions, with above average rainfall predicted in those regions.

Wind gust models produced by WXcharts show a deep area of red closing in on the UK as winds of up to 56mph (91kmh) sweep across Britain and parts of Europe.

The strong gusts are poised to sweep in a deluge of rain across western parts of the country.

The latest 24 hour-precipitation suggest up to 40mm of rain can be expected across the northwest on Wednesday, October 20.

“If they do end up being slightly above normal, it will largely be due to warmer nights and that will be because these nights are largely featuring mostly cloudy conditions.

“At this time we are not confident in what the lowest temperature could be expected.”

The BBC long-range forecast from October 16-29 suggests the unsettled weather pattern is set to be triggered by high pressure in central Europe and low pressure building in the UK.

The forecast says: “High pressure centres will become more common across central or eastern Europe as well as across the sub-tropical Atlantic.

“This should lead low pressure systems to periodically impact the UK by bringing in rounds of rain and perhaps some bouts of strong winds.

“Under this pattern, the best chances for any prolonged dry periods to develop in between any low pressure systems that occur will be across southern and eastern areas.”