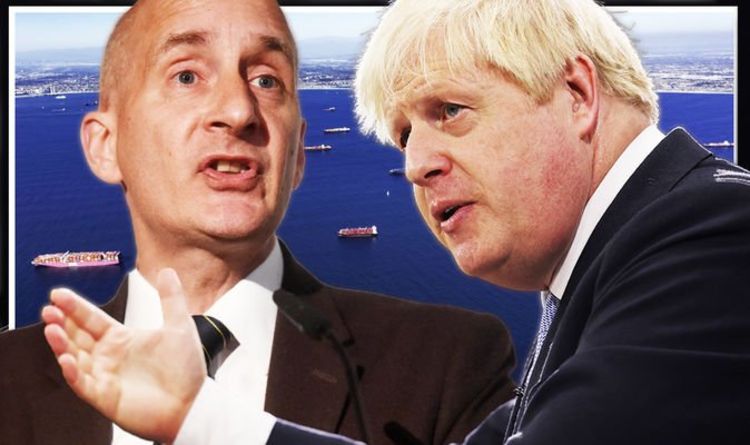 Anti-Brexiteers have made much ammunition out of shortages on everything from fuel to foodstuffs that has hit much of Britain since it left the single market. They claim that the two are directly linked and the problem can easily be resolved by rejoining the bloc.

But today, a picture showing huge queues of container ships at America’s two largest ports has been jumped on by Brexiteers.

They claim that the global supply chain crisis is a direct result of the Covid pandemic and the subsequent relaxing of lockdown restrictions.

After months of inactivity, firms and governments across the planet have struggled to grapple with a huge spike in demand caused by the easing of lockdown measures.

Richard Ballantyne, chief executive of the British Ports Association, told the Telegraph: “This is not a Brexit issue – rather than the haulage problem – and it’s unfair to say that border controls resulting from leaving the EU are a cause of this.”

The Port of LA, known as “America’s Port”, is the biggest entry site in the US for overseas imports while its literal next-door neighbour is called the Port of Long Beach.

They operate a combined total of 13 private container terminals and account for about a third of US sea imports.

Both ports have been running flat out for months, with some vessels having to wait for weeks before they can unload their cargo.

What do you think? Click here and tell us your views below.

As of Sunday, around 87 container ships were classed as import, meaning they are within 40 miles at the two sites, according to the Marine Exchange of Southern California.

About 60 of those were physically anchored, several at the docks themselves, and the rest adrift.

The maritime NGO said the ports’ anchorages are “essentially full”.