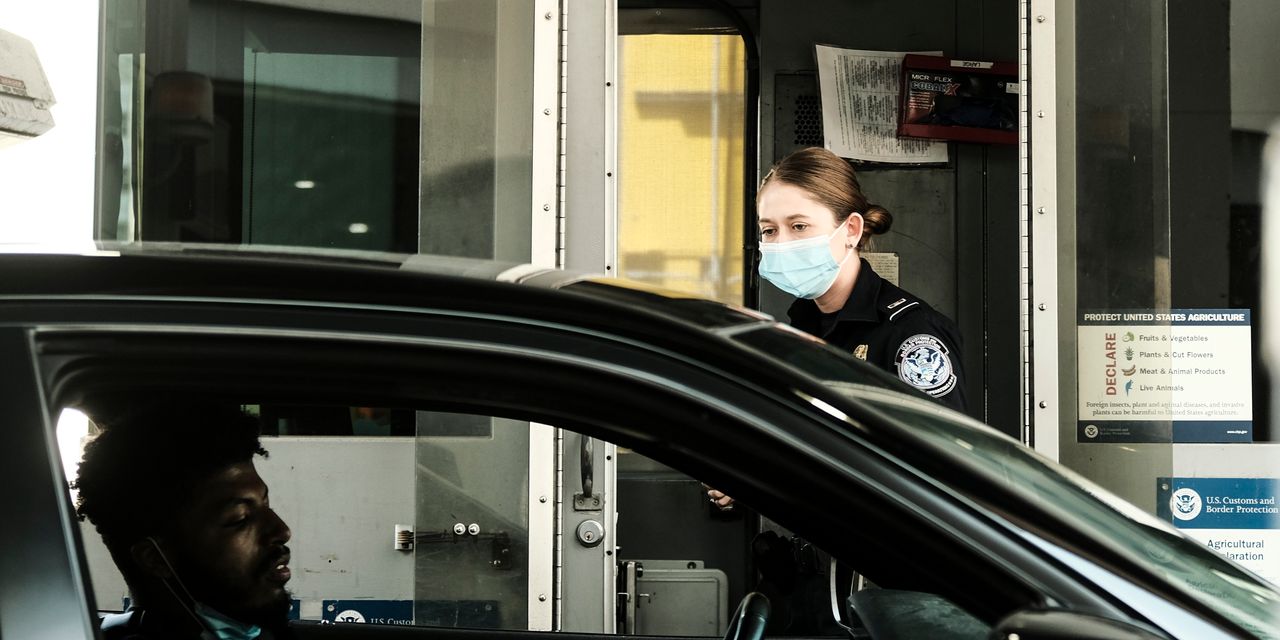 WASHINGTON—The Biden administration intends to ease Covid-19 travel restrictions on land-border crossings from Canada and Mexico and will require foreign nationals taking those routes into the U.S. for nonessential reasons to show proof of vaccination beginning in November.

The new rules from the Department of Homeland Security will amend land-travel restrictions first imposed by the Trump administration in 2020 that have become a source of frustration for the Canadian and Mexican governments and for U.S. border cities, particularly as Covid-19 vaccines have become widely available across the U.S.

For the first time in 20 months, Canadian and Mexican citizens will be permitted to enter the U.S. at its land-border crossings for purposes such as shopping or visit family and friends so long as they are fully vaccinated. Mexican and Canadian citizens were always permitted to enter for essential reasons such as attending school or trucking goods across the border.

Unvaccinated travelers will still be prohibited from coming to the U.S. for nonessential travel.

Senior administration officials told reporters Tuesday evening that the new rules are designed to bring the land borders into harmony with a new vaccine requirement for international travelers arriving by air, also set to take effect in November.

In January, the U.S. will extend the land-border vaccine requirement to foreign nationals coming to the U.S. for essential travel. The administration officials said this additional time would allow a smooth transition to the new system for truck drivers and others. The officials said the implementation dates for the new rules would be announced later.

The relaxed border restrictions don’t affect a separate immigration policy, known as Title 42, that the Biden administration has been using to rapidly deport or turn back to Mexico any migrants crossing the border illegally, without allowing them to ask for asylum after they cross.

The administration also hasn’t allowed migrants to present themselves at legal ports of entry to request asylum, as they could before the Covid-19 pandemic. Administration officials didn’t immediately answer questions about whether migrants would be permitted to do that now.

The border closures separated cross-border families and took a financial toll on border cities in the U.S., many of which rely heavily on Mexican or Canadian foot traffic for sales-tax revenue. U.S. rules, meanwhile, did permit Mexican and Canadian citizens to fly in—without so much as a Covid-19 test before this past January.

“We’re a major artery for trade and commerce, and we have families and two communities who have been separated for far too long,” said Rep. Veronica Escobar (D., Tex.), who represents El Paso, whose downtown area borders Ciudad Juárez in Mexico.

Ms. Escobar said the White House told her about the coming rule changes Tuesday evening. Along with other members of Congress representing sections of the northern and southern borders, she had been pushing the administration to take the step for months. “For the White House, safety was their No. 1 consideration,” she said.

The U.S. first closed its land borders with Canada and Mexico in March 2020, a week after placing travel restrictions on much of Europe. Though U.S. citizens were free to continue coming and going through land ports of entry, Canadians and Mexicans were barred unless they were coming for an essential reason.

The restrictions were renewed monthly, as the Canadian and Mexican governments lobbied the U.S. to lift them. In August, Canada moved unilaterally to reopen its border with the U.S., allowing American travelers to enter the country.

The Biden administration had geared up to begin a phased reopening of land borders as early as July, but reversed course with the rise of the Delta variant. U.S. officials told their Canadian counterparts at the time they wanted to see the U.S. vaccination rate rise before easing restrictions, according to officials in both countries.

A senior administration official said that Title 42 rules would remain in place and said such rules remain necessary because social distancing is nearly impossible in Border Patrol facilities, where migrants are first taken after they cross.

Biden administration officials said the Centers for Disease Control and Prevention would issue guidance for foreign nationals who have received two doses of different Covid-19 vaccines, a frequent practice in Canada.

Write to Ken Thomas at ken.thomas@wsj.com and Michelle Hackman at michelle.hackman+1@wsj.com