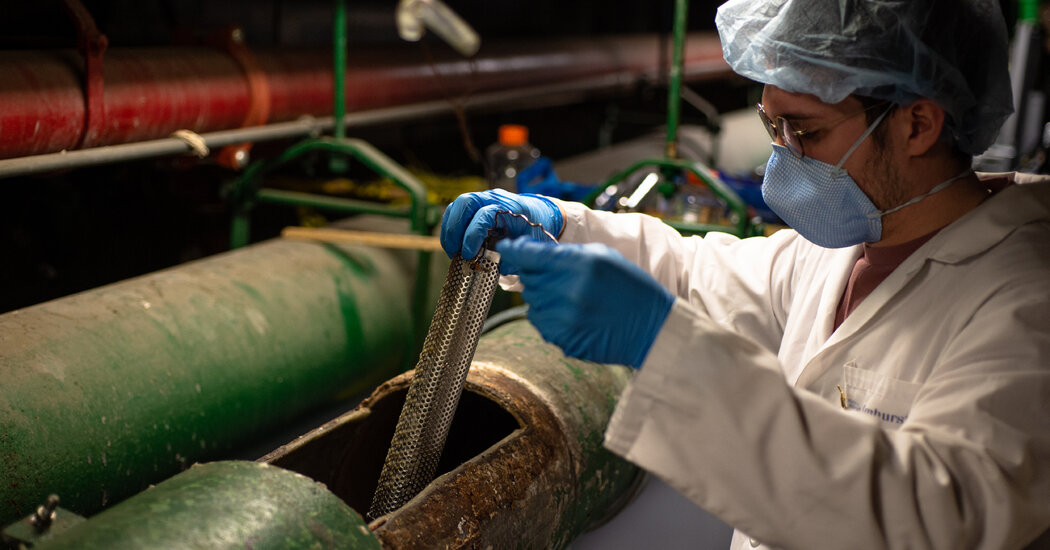 Wastewater surveillance provided valuable public health information during the Covid-19 pandemic and merits “further development and continued investment,” according to a new report released by the National Academies of Sciences, Engineering and Medicine on Thursday.

Although the pandemic spurred the rapid expansion of wastewater surveillance, the current system sprung up in an ad hoc way, fueled by volunteerism and emergency pandemic-related funding, according to the report. It is also concentrated in major metropolitan areas, leaving many communities behind.

“The current system is not fully equitable,” Dr. Guy Palmer, a professor of pathology and infectious diseases at Washington State University and chair of the committee that wrote the report, said at a webinar on Thursday.

The challenge now, he said, was to move from this kind of grass roots system to a more standardized, “representative” national system.

The report was created by a committee of experts appointed by the National Academies at the request of the Centers for Disease Control and Prevention. It was sponsored by the U.S. Department of Health and Human Services.

The report outlined what such a system might look like, noting that it should be able to track a variety of potential threats, which could include future coronavirus variants, flu viruses, antibiotic resistant bacteria and entirely new pathogens.

Some wastewater surveillance sites have already begun tracking additional pathogens, including the mpox virus and poliovirus, but a national system would require sustained federal funding and would need to be implemented equitably across regions and demographic groups, the report notes.

Ideally, the system would combine data collected from communities across the nation with monitoring of sewage at certain “sentinel sites,” such as large international airports and zoos, where new pathogens or variants might be spotted early.

People who are infected with the coronavirus shed the virus in their stool. Tracking levels of the virus in sewage provides health officials with a way to keep tabs on how prevalent the virus is in a community, even if people never seek testing or health care. It has become an especially valuable tool as coronavirus testing has shifted to the home, making official case counts less reliable.

Wastewater surveillance is not a novel idea; it has been used for decades to track polio, for instance. But it was not a widely used public health tool in the United States until the Covid-19 pandemic hit. Over the last few years, many localities and institutions created their own wastewater surveillance systems.

In the fall of 2020, the C.D.C., in partnership with the D.H.H.S., established the National Wastewater Surveillance System to coordinate and centralize some of these efforts.

As of October, the N.W.S.S. included more than 1,250 sampling sites across the country, covering more than one-third of the U.S. population. But those sites were primarily near major cities — and they were especially sparse in parts of the South and West.

Still, these systems paid real dividends during the pandemic, according to the report. Wastewater data helped local health officials determine whether infection rates were rising or falling in a particular community. In some instances, especially when testing was limited, wastewater proved to be a useful early indicator of a surge, with levels of the virus in wastewater beginning to rise days before the official case numbers did.

The data informed policy decisions as well. Universities used wastewater results to strategically test certain student populations, while state health officials used them to determine where to send more resources. Clinicians used data about the spread of new variants to decide when to use or to stop using certain monoclonal antibodies, some of which were only effective against certain versions of the virus.

The report lays out recommendations for developing a more comprehensive national system. For example, it advises the C.D.C. to conduct outreach to public health officials in areas that are currently underserved by wastewater surveillance and to help reduce the financial barriers of joining the national system, perhaps by providing funding. The agency should also educate the public about how the information is used and establish an ethics committee to develop guidelines about data sharing and access, according to the report.

“It needs to be very clear on how that data is shared,” Dr. Palmer said, “to clearly communicate how the data are used and not used with the public and to maintain a strong firewall that precludes use by law enforcement.”

Wastewater surveillance is not a panacea and may be most useful when combined with other kinds of public health data, the committee said. Moreover, there are still a number of scientific unknowns, including whether some pathogens can be reliably detected in wastewater and how changing population immunity, through vaccination or infection, might affect the patterns in the wastewater.

And not all public officials are interested in making use of the data, sometimes for political reasons, the committee noted. “There are some pretty entrenched positions at this point about pandemic response that may be difficult to overcome,” Michelle Mello, a professor of law and of health policy at Stanford University, said at the webinar on Thursday.

She added, “There’s more political will in some places than others.”